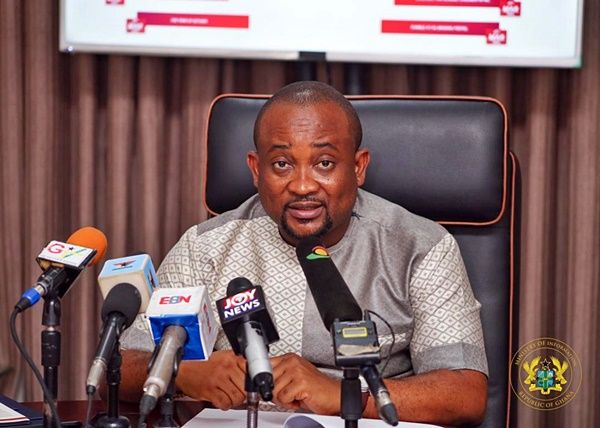 He was emphatic that the former President and elements in the opposition NDC are engaging in "blatant and dirty tribal politics".

The Member of Parliament (MP) for Adansi Asokwa, K.T Hammond has come under a barrage of criticisms after addressing the deployment of Military personnel to the Volta Region.

Hon. K.T Hammond, speaking to a section of the media, explained that the security personnel are in the Region to check the participation of ''non-Ghanaians'' in the new voters' registration exercise which commences on Tuesday, June 30, 2020.

He stressed it is a known fact that a lot of people in the Volta Region do not hail from Ghana but due to the close relationship between residents in the Region and Togolese citizens, there could be an influx of unqualified people partaking in the exercise, hence defeating the purpose of the new voters' register.

“They [Togolese] walk in [Volta Region] and come out normally but they are not Ghanaians. When they walk in there they can do whatever they do so I guess that is the reason for that,” he said.

“The military is at the Aflao border to make sure you vote if you are a Ghanaian and if you have the constitutional right to vote. That’s all there is. They are not electoral officers, but they are peacekeeping forces. They are keeping the peace. They [Togolese] walk into the [Volta Region] and come out normally but they are not Ghanaians. When they walk in there, they can do whatever they do so I guess that is the reason for that'', he added.

Minority Spokesperson on Defence and Interior, James Agalga, addressing the press in Parliament, accused the government of spearheading the Military deployment in the Volta Region.

He believed it is an attempt to intimidate the residents and prevent them from participating in the registration exercise.

''There is a certain scheme which is designed by the government to intimidate our teeming supporters from coming out in their numbers to register and have their names on the new voter register.''

Also addressing K.T Hammond's statements, former President John Dramani Mahama held that sending troops to the Volta Region is a declaration of war on the residents.

He rebuked President Nana Akufo-Addo for sanctioning the Military presence in the Region.

''I have sufficient reason to believe that there is merit in the concerns raised by the residents of these Regions. This represents another unprecedented low in the shameless abuse of state power to attack the very citizens whose safety and security the Akufo-Addo government should be protecting. It is becoming evident by the day, that the Akufo-Addo government perceives political power as an end in itself hence the resort to such crude and high-handed measures to usurp the mandate of the people.

''To send troops into regions in times of peace for the sole purpose of preventing them from registration amounts to declaring war on them. Any President sanctioning this sort of activity stands in breach of his oath to the people of Ghana. Any President doing this, commits a grave sin against the very people he swore to protect. No one would have imagined that a Ghanaian government would be so obsessed with hanging on to power as to subject its own citizens to such mistreatment and execute an ethno-tribal agenda of this magnitude against them'', a statement released by his office read.

Vote Against The NDC

But the Deputy Information Minister, speaking on Peace FM's ''Kokrokoo", strongly holds the view that the opposition party is capitalizing on K.T Hammond's statements merely to pitch Akans against the people of Volta Region.

He, however, was optimistic that their "useless and empty politics" will not succeed.

''Vote against any party that will engage in tribal politics...The NDC should move away from this useless and empty politics of one tribe against another.''

''If Mr. Mahama claims he likes the Volta Region because they have admitted that we (the Voltarians) are the ones who vote for them, I plead with him to select his Running Mate from the Volta Region for us to know if he indeed likes us'', he stated.