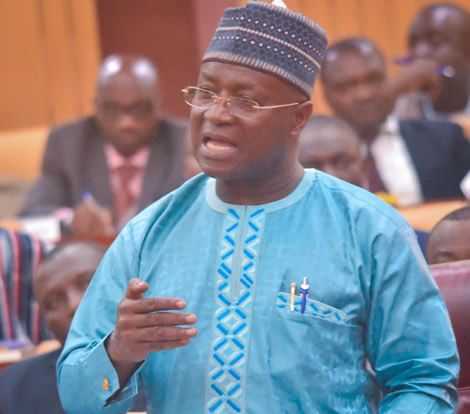 Mr Osei Kyei-Mensah-Bonsu, Majority Leader and Minister for Parliamentary Affairs has repeated the call for Parliament to be involved in the selection of the Commissioner and Deputy Commissioners of the Electoral Commission (EC).

According to him, the method would allow the EC chair to be selected through bi-partisan prior approval and thus shed the perennial cloak of mistrust and the perception of bias.
He argued that per Article 55 (14) of the 1992 Constitution, the EC’s political party regulatory role relating to the scrutiny of sources of funds and campaign financing is a function that was continuously relegated to the background.

Mr Kyei-Mensah-Bonsu made the call at a forum organized by the Ministry for Parliamentary Affairs (MoPA)to engage the Independent Governance Institutions (IGI) to deliberate on the impending general election and their roles in election management.

The forum, on the theme: “Independent Governance Institutions and the 2020 elections: Some reflections” was attended by the Electoral Commission, the National Media Commission (NMC), the Commission on Human Right and Administrative Justice, the National Commission for Civic Education (NCCE) and Civil Society Organizations (CSOs).

Mr Kyei-Mensah-Bonsu said there was a growing rise of opinion for reforms in the face of excessive monetization of elections, especially, at the level of intra-party selection or election processes.

He said the phenomenon, if not checked, had the potential of derailing the country’s democratic journey, adding that the problem required the attention of all citizens to ensure that the EC handled all its constitutional duties.

“The seeds of corruption are brazenly sown. It has the potential of derailing our journey to the kingdom of democracy. This requires the attention of all of us and also to ensure that the EC is equipped to handle all its constitutional duties,” he said.

Mr Kyei-Mensah-Bonsu emphasized need for a comprehensive review of Ghana’s 1992 Constitution rather than tinkering with some aspects of the document.

He suggested that the approach could be cross-section representation to solicit the views of Ghanaians as to the way forward to review the constitution.

He raised other issues such as the composition, tenure, funding or resource allocation, selection and issues of population quota which he said were fundamental ingredient in defining constituencies but which the EC relegated to the background.

The Minority Leader, Haruna Iddrisu advocated more resources for the IGI especially the NCCE, NMC and CHRAJ to optimize their operations in the upcoming elections.

He raised concerns about monetization of elections and the “weaponization’ of vigilantism that had the potential to undermine the country’s democracy.

He wondered whether the various opposition parties were given fair and equal access to the State owned media as required under Article 162 of the 1992 Constitution.

Mr Yaw Boadu Ayeboafoh, Chairman of the NMC in his remark announced that the Commission was working with the Ministry of Information to develop a framework to guarantee the security and safety of the journalist.

He said as a regulatory institution the NMC developed a number of guidelines some of which were to be transmitted into legislation by Parliament.

He said the objectives for the guidelines was to ensure that the media environment was free but responsible, adding that the Commission had developed guidelines for political reporting, elections, the use of languages and particularly the State-Owned media in terms of their political coverage.

Mr Ayeboafo also commended the private and the state-owned media for devoting resources both human and material to ensure they adequately covered the elections even in the face of the pandemic.

Ms Josephine Nkrumah, Chairperson of the NCCE speaking on the topic: “Strengthening the institutional capacity of NCCE to deliver voter education towards the 2020 elections” stated that the key objectives of the Commission in its public education was to ensure peace before, during and after elections and reduce voter apathy.

She said the commission would educate the citizenry on the need to respect voting procedures and the public health safety protocols at the registration centres in the wake of the COVID-19 pandemic.

She gave the assurance that the Commission would continue to enhance its civic education in terms of people’s civic responsibilities and discourse, re-activating the inter-party dialogue platforms at the constituencies towards the 2020 elections among others.

Ms Nkrumah also indicated that though challenges of the NCCE was no secret, the COVID-19 had exposed their weaknesses in terms of the tools for education and called for a strong bi-partisan advocacy for the IGIs especially the NCCE, NMC and CHRAJ in terms of the funding needs.

Mr Joseph Whittal, Commissioner of CHRAJ, called on all duty bearers to appreciate that transparency and accountability were human right issues.

He expressed concern about the increasing monetization of elections in the country, abuse of incumbency by parties in power in terms of using state resources to promote partisan interests.

Mr Alexander Poku Akubia, Acting Director, Research, Monitoring and Evaluation at the EC expressed worry that the high level of mistrust in the system could undermine the 2020 elections.

He however assured that the EC is confident of delivering a free and fair elections which reflect the will of the people.

He explained that every election was unique in the sense that the contest within which an election was conducted was ever changing because of the social, economic and political underpinnings.

Dr Evans Aggrey-Darkoh, Chief Director of the MoPA, stated that the objective of the ministry’s engagement with the IGIs was to deepen the collaboration between the MoPA and the IGIs to support the consolidation of Ghana's democracy.

The meeting would afford the participants the opportunity to assess the institutional capacity of the NCCE to conduct voter education and interrogate the regulatory framework to guide the conduct of media practitioners in the 2020 elections.

Dr Aggrey-Darkoh said the meeting would review the human rights dimensions of democratic elections in Ghana and their implications for the conduct of the 2020 elections.

He said the discussion would examine the steps taken to instill confidence in the electoral processes to be open, fair, transparent, inclusive and accountable.