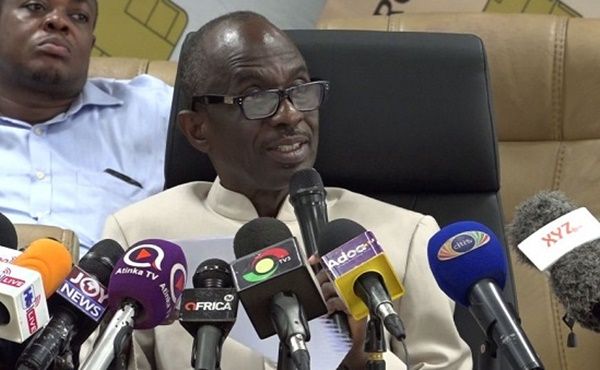 General Secretary of the National Democratic Congress, Mr. Johnson Asiedu Nketia, has described the Supreme Court's decision on the NDC vs Electoral Commission case over the compilation of a new voters’ register, as the "most bizarre" ruling he has ever heard in his entire political life.

To him, the ruling simply "does not make sense".

Earlier last week, the apex court, in a unanimous decision dismissed the NDC’s writ seeking to stop the EC from rejecting the existing voter’s card as proof to obtain a new card in the new voter registration exercise which commenced on Tuesday, 30th June 2020.

Still Stand By My Comments

Speaking on Okay FM's Ade Akye Abia Morning Show for the first time since his gaffe on the Supreme Court ruling, the NDC scribe said he still stands by his comments though most political watchers consider as a deliberate misrepresentation.

"If it hadn't been for the fact that they have asked the parties involved not come to the court on the issue again, we would have gone to seek a proper interpretation of what their ruling was,” he added.

Mr. Asiedu Nketia, bore the brunt of the joke of Ghanaians when he expressed satisfaction at the ruling minutes after it was delivered, saying the apex court had ruled in the party’s favour by calling for the inclusion of the existing voter ID card as one of the source documents for registration during the upcoming voters’ registration exercise; a relief which the court clearly did not grant.

“..the court has just delivered the verdict which has granted our request for the inclusion of the existing voter card as breeder document for the compilation of the new voters’ register. We feel vindicated,” he told the media at the forecourt of the Supreme court.

His reaction bemused the general public with the ruling New Patriotic Party (NPP) calling on him to apologize for attempting to mislead Ghanaians.

The 7-member panel presided over by Chief Justice Kwasi Anin-Yeboah, in its decision on 24th June, held that the EC is an independent body and will only be directed by the court if it acts contrary to the law.

It would be recalled that two groups, the opposition NDC and a Private citizen Mark Takyi-Banson filed the case asking the apex court to stop the EC from compiling the register or allow the use of the birth certificate and voters ID card by prospective voters as proof of identification.

I Did No Wrong

Though Ghanaians took to social media to mock him for misinterpreting the court’s ruling, Asiedu Nketia said he still stands by his comments because he "did no wrong" in his analysis of the ruling.