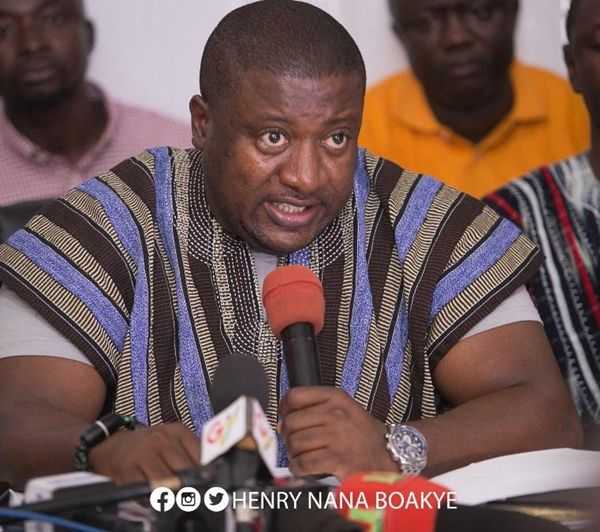 National Organizer of the New Patriotic Party (NPP), Henry Nana Boakye a.k.a Nana B has chastised the National Democratic Congress (NDC) for issuing an ultimatum to government to withdraw the Military in the Volta Region.

Minority Spokesperson on Defence and Interior, James Agalga, addressing the press in Parliament, accused the government of deploying security personnel in the Volta Region to intimidate Voltarians and prevent them from participating in the new voters' registration exercise.

''There is a certain scheme which is designed by the government to intimidate our teeming supporters from coming out in their numbers to register and have their names on the new voter register'', he said.

The NDC Minority in Parliament also issued a day ultimatum to the government to withdraw the military personnel from the Region.

Chairman of the Volta Regional Caucus, Emmanuel Bedzrah in a press conference at Aflao, called for the troops to be immediately recalled to their barracks.

Member of Parliament for North Tongu constituency and Minority Spokesperson on Foreign Affairs, Samuel Okudzeto Ablakwa, sharing the sentiments of Mr. James Agalga, further cautioned the government to withdraw the heavy military presence in the Region.

Speaking on Peace FM's 'Kokrokoo', Nana Boakye shot back at the NDC for creating an impression that President Nana Akufo-Addo had strategically concentrated Military in the Volta Region to ensure the residents do not participate in the ongoing registration exercise.

Nana Boakye questioned the NDC's logic stressing the Volta Region is not the only Region with heavy security presence but the security forces are also in eight other Regions.

He explained that the joint security forces, comprising the Armed Forces, Police, Immigration Service and National Security operatives have been deployed to guard the borders of Ghana but not to terrorize any person in the Regions nor prevent them from registering their names.

“In the Upper East, we deployed 206 soldiers. We sent 110 and 102 soldiers to Northern and North East Regions respectively. We deployed 98 to the Volta Region. Oti Region had 92, Upper West with 65. Bono Region also has 60, Western and Savanna Regions with 27 and 21 respectively. In all, we have deployed the Military to nine Regions,” he told host Nana Yaw Kesseh.

The NPP National Organizer warned the NDC to refrain from tribal politics and stop creating tension in the country.

''By Executive Instrument, we have closed the border. How does the registration correlate with border issues? What is it?'' he questioned, adding that the NDC's logic is below the belt.

''...God bless the Defence Ministry; continue to protect our borders...The President has acted and he has acted rightly and the people of Ghana who gave him the mandate are backing him with prayers,” he added.

Former President John Dramani Mahama issued a statement to condemn the security presence in the Volta Region, stressing sending troops to the Region is a declaration of war on the residents.

He scolded President Nana Akufo-Addo for sanctioning the Military presence in the Region.

"I have sufficient reason to believe that there is merit in the concerns raised by the residents of these Regions. This represents another unprecedented low in the shameless abuse of state power to attack the very citizens whose safety and security the Akufo-Addo government should be protecting. It is becoming evident by the day, that the Akufo-Addo government perceives political power as an end in itself hence the resort to such crude and high-handed measures to usurp the mandate of the people.

"To send troops into regions in times of peace for the sole purpose of preventing them from registration amounts to declaring war on them. Any President sanctioning this sort of activity stands in breach of his oath to the people of Ghana. Any President doing this, commits a grave sin against the very people he swore to protect. No one would have imagined that a Ghanaian government would be so obsessed with hanging on to power as to subject its own citizens to such mistreatment and execute an ethno-tribal agenda of this magnitude against them," a statement released by his office read.

President Akufo-Addo, delivering a nation address on the new voters' registration exercise Monday evening, debunked the claims by the opposition party and their flagbearer, John Mahama.

According to him, there is no ill motive behind the security deployment.

He emphasized that the security personnel have been charged to defend Ghana's borders to foil any potential terror attacks in the country.

''The longstanding deployment of security personnel, especially the military, along our borders is another dimension of this process of guaranteeing the peace of the nation. Fellow Ghanaians, it is no secret that our neighbour to the north, Burkina Faso, has, in recent times, been at the receiving end of a number of terrorist attacks, as has another neighbour, Cote d’ivoire. To shore up our borders against such attacks, and to defend our nation’s territorial integrity, the Armed Forces, at least since I came into office, have been very proactive in engaging in operations to secure our borders, and foil any potential terror attacks on our soil''.

''Operations such as ‘Conquered Fist’ and ‘Koudangou’ have been going along for some time, since 21st February 2019, to meet this objective. Deployments of soldiers in areas along our borders have been regular, and residents living in border towns will bear testimony to this," he added.