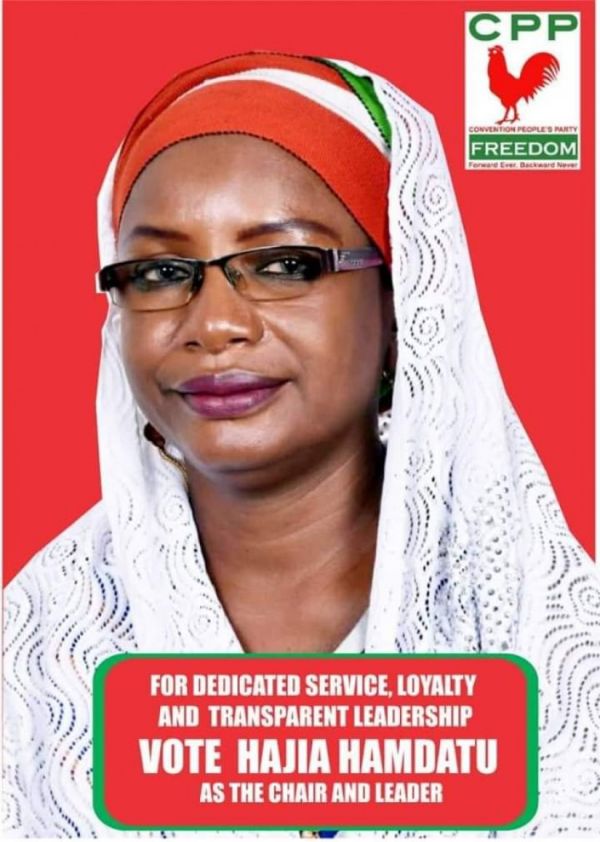 Hajia Hamdatu Ibrahim, Acting Chairperson of the Convention People’s Party (CPP) has stepped-out to contest for the National Chairperson and Leadership slot at the August 15 National Delegates Congress of the party.

Hajia Hamdatu’s campaign is on the foundation: “Long Service and Loyalty- the bridge between the young and old,” says now is the time to blend, transform and build the party on a solid foundation under the forth democratic dispensation.

“I am the walking encyclopaedia of the current CPP, having served as National First Vice-Chairperson, National Women Organiser, Constituency Treasurer, and Deputy Secretary to Youth League, and Secretary to the Women's League.

“I was also a key member of the campaign team of Mr Kwasi Pratt Junior in 1996 when he contested the Ayawaso Central Parliamentary seat,” Hajia Hamdatu told the Ghana News Agency in an interview to outline her commitment to lead and modernise the CPP.

Hajia Hamdatu who is currently the Commissioner in-charge of West Africa, Women Academy for Africa (WAFA) since 2011 said she was ready to guide the party through strategic campaign model to target parliamentary seats in Election 2020 to ensure the party wins those seats.

Hajia Hamdatu said the CPP was the only party that could lead the country on to the path of progress and development and to make a positive impact on Ghanaians.

She was confident of winning the upcoming congress, since she was a grass-roots person, adding, “My track record will win the election for me”.

Hajia Hamdatu comes from Kumbungu in the Northern Region, but was born and bred in Bolgatanga in the Upper East Region.

She started her political career in 1992 and in 1995, and was the Treasurer for the La Dade Kotopon Constituency and was also a member of the National Youth League of the party up to 2003.

Hajia Hamdatu was elected as the National Women’s Organiser in 2007 and in 2011, but lost the position and was offered a position as a member of the National Executive Council due to her unwavering commitment to the party.

In the same year, she was appointed the National Women’s Organiser again after the resignation of the then National Women Organiser to join the Progressive Peoples’ Party (PPP).

In 2015, she was elected as the First Vice Chairperson of the party and in 2019, she was named the acting National Chairperson.