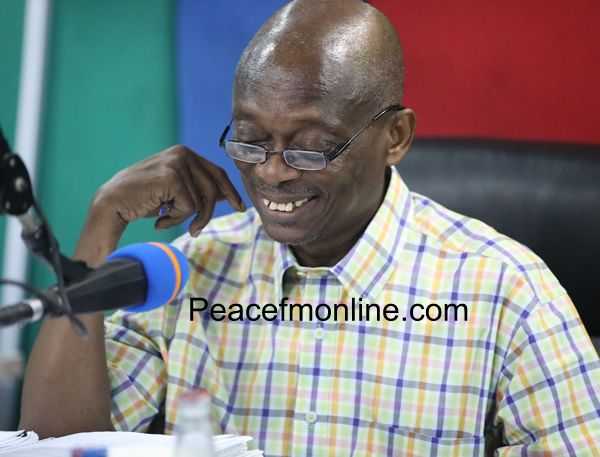 Rape is one of the sensitive issues that one needs to be extra careful when talking about since any slight slip of the tongue could spark agitations.

Lots of rape victims never want to be reminded of how some unscrupulous persons overpowered them to satisfy their libido.

Aside rape being criminal, it is one of the most painful experiences in life.

Some rapists end up in jail while others able to go scot free because their victims either keep mute or are silenced with threats.

In view of this, seasoned journalist, Kweku Baako has devised a better technique women can use to ward off potential rapists.

Kweku Baako has advised that any woman who is forced into sex should locate the testicles of the man and squeeze them till he loses strength to accomplish his mission.

" I am advising the ladies out there if anybody wants to rape you, squeeze his balls. The incentive will be totally out of the way," he said on Peace FM's 'Kokrokoo'.

His counsel, comes on the back of a similar balls-squeezing account captured in the ''Working With Rawlings'' book authored by Prof. Kwamena Ahwoi, a former Minister of Foreign Affairs and former Minister of Local Government and Rural Development between years 1990 and 2001, detailing his relationship with the founder of the National Democratic Congress (NDC), former President Jerry John Rawlings.

In the controversial book, Mr Rawlings is alleged to have squeezed the testicles of a former member of the NDC, Bede Ziedeng for opposing the candidature of Prof John Evans Atta Mills to lead the party in 2002.

"Bede Ziedeng and others had formed a human shield to protect dignitaries going into the Trade Fair Site. As Rawlings was going in, the crowd moved closer to see him and cheer him on. This made it nearly impossible to see whatever was going on. So Rawlings took advantage of the situation. He held Bede Ziedeng’s testicles, squeezed them hard and left them in record time. This caused Bede Ziedeng to faint immediately. He was taken away and given attention until he recovered. An unperturbed Rawlings accessed the hall and the proceedings went on. Mr Ziedeng later reported Rawlings to some leading members of the NDC, including Prof Ahwoi. When Rawlings was confronted on the matter, he merely laughed it off. But the incident nearly led to Mr Ziedeng leaving the party for good," Prof Ahwoi recounted in his book.