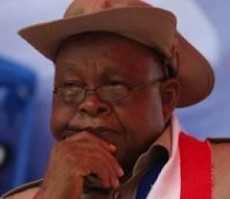 The Speaker of Parliament, Professor Aaron Mike Oquaye, has commended the ‘Aspirants Unite for Victory Movement’ of the New Patriotic Party (NPP) for joining forces to campaign for victory in the December 7 Election.

Speaking at the official launch of the group in Accra on Monday, Prof. Oquaye described the action of the group as unprecedented in the annals of the party.

The group is made of 220 parliamentary aspirants and 42 NPP sitting members of Parliament (MPs) who lost the party's parliamentary primaries in June this year.

The Speaker told the defeated aspirants to take inspiration from President Akufo-Addo, who suffered several electoral defeats both within the party and general elections before eventually winning power in the 2016 general elections to become the President of the Republic.

Prof. Oquaye entreated them to work assiduously to ensure victory for the President and all the 275 parliamentary candidates of the party.

He indicated that usually after the party's primary, there was much bitterness and agitations from aspirants who lost the bid to contest on the ticket of the party.

That internal wrangling, he said, mostly cost the party in the general elections, especially when those who lost in the primary contested as independent candidates and refused to campaign for the party.

Prof. Oquaye asked the aspirants not to rest on their oars, but campaign vigorously to ensure the NPP maintain the majority seats in parliament, to support the passage of policies of the ruling government.

Members of the group have announced plans to adopt Upper West Akyem and Mion constituencies, which the NPP has never won and to campaign vigorously to win for the first time.

They also intend to intensify media engagements and produce documentaries to drum home the achievements of the party over the past three and a half years in government.