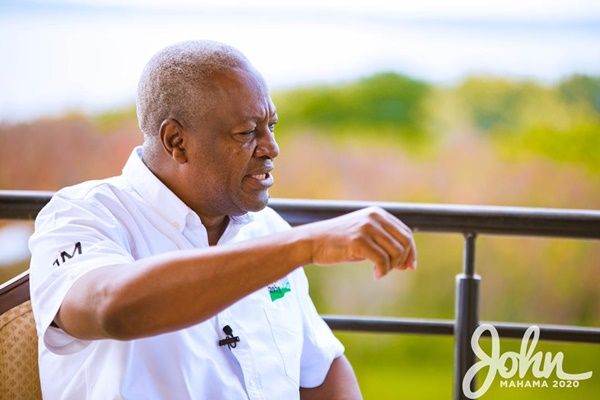 In what can best pass for an official response, Former President John Dramani Mahama, has publicly condemned the actions of the Volta Separatist group known as the Homeland Study Group Foundation (HSGF) seeking independence from Ghana.

Slamming their action, the former President stated emphatically that “Ghana is a sovereign republic” and added that: “Nobody can claim a part of Ghana”.

Ghanaians woke up to the news of some secessionist group blocking roads leading to the Volta Region while clamouring for independence from Ghana.

On Friday, September 25, 2020, some of the members of the group blocked some major roads and burnt lorry tyres on the ECOWAS road at Tademe, some kilometres away from the Sogakope Bridge in the South Tongu District impeding vehicular movement and leaving passengers traveling to areas in the Region stranded.

The group also attacked Police stations at Aveyime and Mepe in the North Tongu District, amidst demands for the Volta Region to be an autonomous country known as "Western Togoland".

However, in a swift response, a joint team from the Military and the Ghana Police Service nipped it in the bud with 31 people being arrested in connection with the uprising.

Surprisingly, on Tuesday dawn, the the secessionist group carried out an arson attack at the State Transport Corporation (STC) yard in Ho.

In the wake of these attacks, some have questioned the largest opposition party's loud silence over the group's action, especially when Traditional leaders including Togbui Sri III, the Awomefia of the Anlo state, leaders of Gbi-Hohoe, as well as members of the National Houses of Chiefs, have all voiced out their condemnation.

But on Tuesday, during a tour of Jinijini in the Bono Region, the flagbearer of the National Democratic Congress (NDC) made reference to the series of recent violent attacks launched in parts of the Volta Region by the secessionist groups saying; "Our father Rawlings put Ghana together”.

“We are all part of the nation Ghana: Ewes, Bonos, Asantes, Dagombas, Fantes.

“We make up the nation Ghana as one people and, so, we won’t sit aloof for any group to say they want to secede”, the former President said.

“If we allowed every group to secede one after the other from the unitary state, what would be left of the country?” he asked.

He added: “What unites all of us is that we identify ourselves as Ghanaians”.

“And what makes the NDC unique is that we don’t discriminate based on ethnic affiliations. NDC governments always unite the citizenry”, Mr Mahama said.

In a related development, the police has begun a probe into the arson attack.

According to the police, at about 02:00 am, four armed men stormed the Ho STC yard demanding the keys to all the vehicles parked and set two of the minibuses ablaze when the drivers did not produce the keys.

The arrival of police and fire service personnel saved the situation.

The police says its preliminary investigation shows that there were eleven vehicles parked at the time of the attack.

One bus was completely burnt and another slightly burnt. A flag of the group was found at the scene, the police noted in a statement.

The security agency has urged the public to remain calm and volunteer information for the arrest of the perpetrators.

There are several separatist groups in the Volta region advocating independence. It is unclear which of the groups attacked the transport yard.