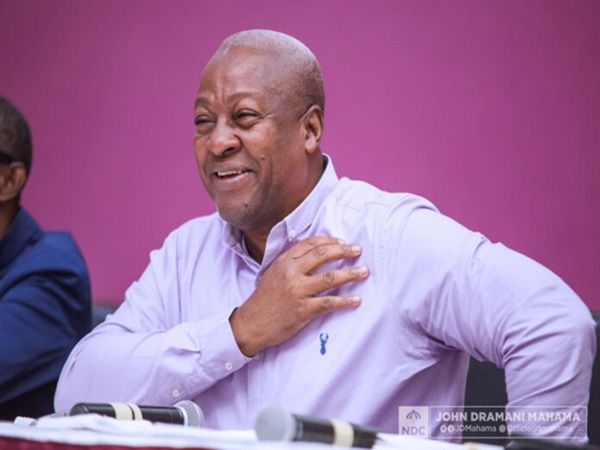 Ex-President John Dramani Mahama has assured of his government’s preparedness to absorb apprenticeship fees and cost of start-up capitals if the Ghanaian electorate gave him the mandate for a second-term.

He said apprenticeship fees and affordability of start-up capitals had been a stumbling block for many unemployed youth to acquire skills training and that elimination of those barriers would create employment amongst the youth and enhance job security.

According to the National Democratic Congress (NDC) Election 2020 Manifesto, free technical and vocational training would pave the way for both the privileged and the less-privileged to be empowered socio-economically to contribute meaningfully for the country’s progress.
Mr Mahama, accompanied by Mr Jonson Asiedu-Nketiah, the NDC General Secretary and other party officials, gave the assurance when he addressed the Council of Elders, Imams and people of the Sunyani Zongo Community after an earlier visit to the Sunyani Traditional Council to resume his campaign tour of the Bono Region.

He said his government would design a scholarship package for students from the zongo communities, particularly females, to pursue academic and other professional programmes of their choice at the tertiary level.

He pledged his commitment to building senior high schools in all zongo communities, which lacked those facilities and implored them to cast their ballots based on their living conditions.

Mr Mahama appealed to every Ghanaian to preach and promote a violence-free election come December 7.

Mr Aseidu-Nketiah said to ensure the wellbeing of the zongo communities, the Mahama-led government would construct separate mortuary facilities in all government hospitals with trained Muslim pathologists to take care of their corpses.

Sheikh Umar Abdul Kardir, the Bono Regional Chief Imam, entreated political parties’ supporters and sympathisers, especially the youth, to place high premium on the prevailing peace in the country and desist from acts that would foment trouble and violence.

“The nation was protected and not destroyed by our forefathers, so we must also protect and maintain its absolute peace and security for future generations,” he said.