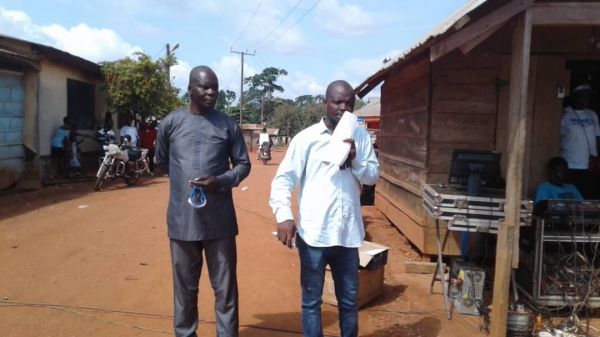 Mr Daniel Mensah a staunch supporter of the opposition NDC and campaign Team Member for Vincent Oppong Asamoah, former MP for Dormaa West and Deputy Minister for Sports has defected to the ruling New Patriotic Party due to better economic management by President Akufo-Addo.

Daniel Mensah said, he has been an ardent supporter of the opposition National Democratic Congress since 1992 and was Poling station secretary and also a Campaign team member for the NDC parliamentary candidate Hon Vincent Oppong Asamoah but has now joined the NPP because the NPP has delivered pro poor policies something he said the NDC failed to deliver.

He disclosed this at Kookumikrom a farming community at Dormaa West when the Bono Regional Secretariat of the Party led by Kwame Baffoe Abronye stormed the area with retail campaign to canvass votes for President Akufo-Addo and the Member of Parliament for the area Hon Alui Maiga ahead of the impending general elections.

As part of innovations and strategies to obtain a first round victory for President Akufo-Addo, the party in the region is vigorously embarking on a retail campaign in order to get the good message of the NPP Government across the entire region.

The move involves spending a day in a constituency visiting at least three communities, organise rallies, interacting with people in their homes, in the markets, food joints, streets among others.

Chairman Abronye speaking at a seperate durbar at Kwaadwomokrom another farming community said the opposition NDC upon seeing defeat staring at their flag-bearer have adopted operation vote skirt and blouse for President Akufo-Addo and NDC parliamentary candidates.

According to Abronye, the move is a grand scheme of the NDC to secure more parliamentary seats after the elections and use it to thwart the efforts of President Akufo-Addo after elections but has urged Ghanaians to shun the NDC and their propaganda by voting overwhelmingly for Nana Addo and the parliamentary candidates across the country.

The areas they visited on the day two of the retail campaign were Kwaadwomokrom, Kookumikrom and Kwaku Anya all farming communities in the Dormaa West Constituency.