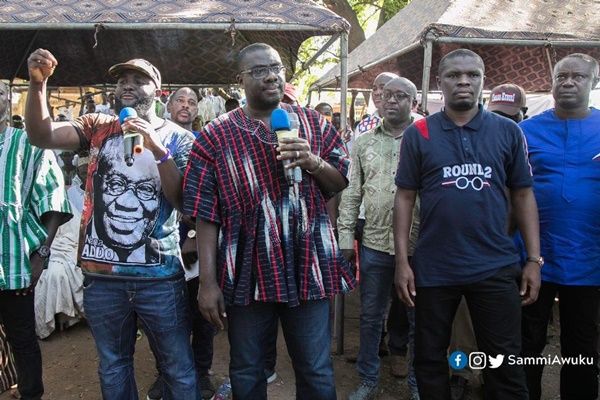 He made the appeal when he visited the Yagaba-Kubori Constituency as part of his campaign tour in the North East Region.

According to him the NPP government led by President Akufo-Addo will not neglect their needs unlike former President John Dramani Mahama who claimed to be a Northerner yet neglected the people of the Yagaba-Kubori.

He also indicated that the NPP has built a very sound foundation in its first term and will need the mandate of the people to solidify the gains made so far to make the lives of Ghanaians better.

To him, since the NPP took over power from 2017, all the party’s policies have been to improve the lives of the ordinary Ghanaian and that is what they intend to continue when the second mandate is given to them.

Sammi Awuku who has been campaigning in the Yagaba Kubori constituency in the North East Region also canvassed votes for NPP Candidate Mustapha Ussif and reminded the electorates of several interventions made by government in the area of education, health, agriculture and infrastructure to improve upon the quality of lives in the constituency.

He further stressed that Mustapha Ussif on his determination to return to Parliament to be an agent of development and also work with President Akufo-Addo to move Yagaba Kubori forward.

“NDC Presidential Candidate and Parliamentary Candidate have been neglecting the constituency and depriving them of their fair share of the National cake."

He therefore asked the constituents in the area in the North East Region to vote massively for the President in order for him to stabilize Ghana’s economy.

He further appealed to the electorates to give Nana Addo another four years to stabilize the economy.

The ecstatic crowd also welcomed the NPP team to the community with their huge presence and pledged their determination to make a difference for the continuity of President H.E Nana Akufo-Addo and his administration together with the NPP Parliamentary candidate Mustafa Ussif to represent them in the next Parliament.

Sammi Awuku is expected to visit Mion, Tamale Central, Tamale North, Gushegu, Karaga and Tolon in the Northern part of the country  to also campaign with the party’s Parliamentary candidates and constituency executives ahead of the December 7 elections.