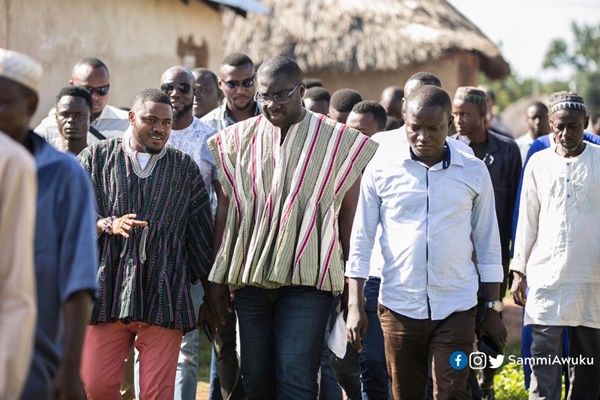 National Organizer of the NPP , Sammi Awuku has appealed to residents and constituents of the Mion and Tamale Central Constituencies in the Northern Region to give President Akufo-Addo four more years to move the Nation’s developmental agenda forward.

According to him, the NPP is confident of winning Mion and working hard towards that.

In his typical community engagements style today in Salankpa, Sang and other communities in the Mion constituency he labeled the NDC as a party that does not keep its promises to the people and failed woefully when they presented with the opportunity to rule.

“Thanks to President Akufo Addo both Abudus and Andanis can now sit round the same table and eat together.

The National Organizer has been embarking on a surgical campaign in many of the rural communities canvassing for votes for the NPP Presidential Candidate, President Nana Akufo Addo and their Parliamentary Candidates.

At the ADB Electoral area in the Tamale Central Constituency, the National Organizer extolled the virtues of the NPP Presidential Candidate and that of his Parliamentary Candidate asking for the constituents to give Nana Addo four more years to continue with his developmental plan in the constituency. He said it is refreshing to see that, thanks to Nana Addo , the Tamale water problem has been solved and also just at the heart of the constituency the First interchange of the Northern Region is being built which will open up the City for economic prosperity and to aid vehicular movement.

He said with the combined Holy Books of The Bible and Quran the NPP places enormous respect on the value of religion and hence restored the Arabic instructors allowance which the NDC cancelled.
He also spoke about health and education which has seen major interventions from the NPP government.
Nana Akufo-Addo and Dr Anyars Tamale Central will see more developmental projects.

The National Organizer takes his constituency engagements to Gushegu, Tolon, Tamale North and Karaga in the coming days.

He has been meeting several youth groups within the constituencies as well, since many of the youth identify with him.