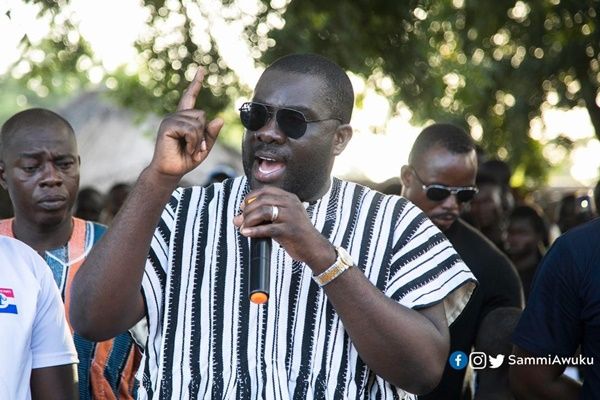 The National Organizer of the ruling New Patriotic Party (NPP), Sammi Awuku has urged Ghanaians to vote for NPP and President Akufo-Addo for a second time during the upcoming December 7 elections.

He urged the electorates to vote for the NPP for the future of Ghana and their children.

According to him, the future and education of Ghanaian children will be at stake should the NPP lose the general elections.

He said one good term deserves another.

Sammi Awuku who has been campaigning vigorously  and touring the Northern part of Ghana was at Gushegu to campaign for President Nana Addo Dankwa Akufo-Addo and the Parliamentary candidate,  Hon. Lawyer Hassan Tampuli.

He also touted various interventions of the NPP government since it assumed office and the honesty of the Akufo Addo administration in delivering its promises to the citizenry.

"Today , Gushegu have their fair share of National Development, under the 1 Village 1 Dam, A Shea processing Company under the 1 District 1 Factory, a new health centre and also with many of the children benefiting from the Free SHS."

He also made a case for the Parliamentary candidate of Gushegu, Lawyer Tampuli, stressing “Lawyer Tampuli has been a development agent in this constituency and therefore deserve an opportunity to represent his people in Parliament and also give Nana Akufo-Addo 4 more years to continue with the developmental agenda of the nation”.


The people received the message of the NPP team in good faith and pledged to vote massively for President Akufo-Addo and the NPP.

They chanted “one good term deserves another”.

Sammi Awuku was in the company of NPP Parliamentary candidate for Gushegu Hon. Lawyer Hassan Tampuli, Northern Regional Chairman B. Samba and executives of the party.