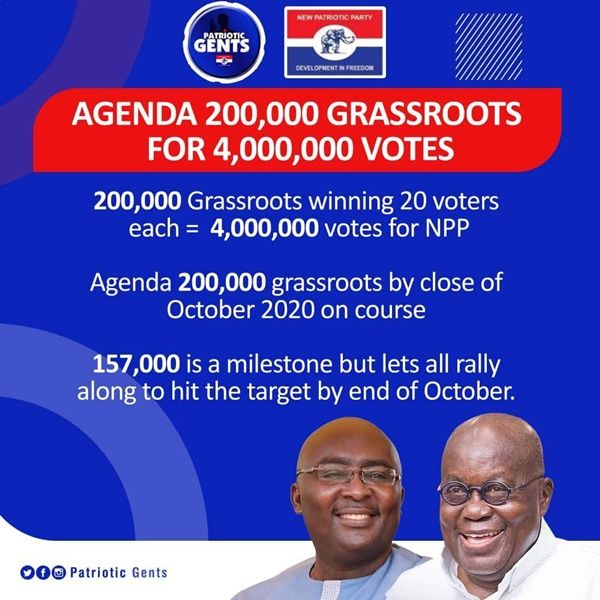 Patriotic Gents, all male groups in the New Patriotic Party (NPP), has pledged to deliver four hundred thousand votes for the party in the December 7 polls.

According to a statement signed by the Communications Director, Kwabena Berma Pobi  expressed heartfelt gratitude to the office of the Vice President and all those supporting their  agenda.

“The Journey has so far been successful with an over 75% success rate but as determined to meeting every goal, let us all do it together as we have always done.”

“We are men of courage and achievers at heart by all standards, let us achieve one more time together,” portion of the statement read.

Read the full statement below:

The Ghanaian youth and the young at heart have been good to us especially since Patriotic Gents re-strategized in August 2019. We have enjoyed so much patronage and acceptance, especially with our teaming committed Grassroots.

Once again we come before the youth and young at heart, especially the grassroots who have been our main major stakeholders in this success story.

The Journey has so far been successful with an over 75% success rate but as determined to meeting every goal, let us all do it together as we have always done.

Let us do this together as always. We have done more than this before so we can do it again.

We succeeded in disrupting the NDC’s grassroots comfortable lead strategy, which has resulted in frustration in their campaign and discouragement in their camps. We will continue to intercept their strategies and reverse it like we have done so far since August 2019. We did 157,000 in our usual silent approach, let us finish hard as always.

We are men of courage and achievers at heart by all standards, let us achieve one more time together.

It has been one success story, after the other. We say thank you to all who have helped in diverse ways to raise these numbers making the group the largest in the country currently. We also thank all who have contributed or participated in our uncountable number of philanthropic activities Since August 2019.


The NPP Party executives have been phenomenal, especially the executives at the regions and constituencies, since our target was mainly the grassroots in the immediate effect. Some national Executives have also been wonderful, especially from the office of the National Organizers and the Youth Wing.

The Vice President's office has also been represented any time we called on them, the First lady’s office has been our Pride and our invitations for collaboration have been more than appreciated. The Information Minister’s office has also been more than helpful in our course and we cannot forget the Danquah Institute. The General Secretary has always committed to meet up but conflict in our schedules have always made it impossible, the messages from the Chairman’s office have also been very appreciated and encouraged.

Maintaining the family to sustain the numbers for Victory 2020.