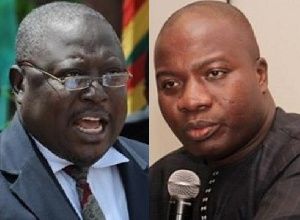 Likewise, he said he does not have any medical record of Mr Martin Amidu that indicates he has been to Germany for medical reasons.

In a radio interview with Accra based Citi FM Thursday evening, [November 19, 2020], Mr Ayariga said, "it is unfortunate that the issues are turning around to medical records. But I don't have any medical records of my uncle, Martin Amidu."

"I think that its unfortunate that I'm being put in the centre of this whole controversy about his [Amidu] resignation. I think we should focus on the real reasons why he has resigned and deal with it."

The Office of Special Prosecutor is in court with Mr Ayariga over the importation of some vehicles.

Mr Ayariga's name has popped up through Mr Ken Agyapong who in a television interview said Ayariga told him about Amidu's medical condition in a conversation in Parliament when Amidu was first appointed and he was to appear before the Appointment Committee of Parliament.

Speaking to Citi FM, Mr Ayariga said as a family member of Mr Amidu, he has already indicated that when he picks the signal that Mr Amidu's life was in danger and feels threatened, he, as a son will always go to his aid first to protect his life before they go back to court to settle their issues.

"Let me put on record that I don't have any medical records of him being sent to Germany for treatment."

"I don't recall having discussions with Hon. Kennedy in which I made reservations about medical condition and treatment in Germany etc. And so I will say, I should be left out of the conversation, I'm in court and today I was in court...and I'm fighting my matter in court.

"Ayariga was going to take him on to produce his medical records and explain why he went to Germany but [John] Mahama told him to stop. Don't raise this question at the Appointments Committee [of Parliament], Mahama advised them not to raise that issue about the medical record and it was never brought up because they knew that one day this will happen," this is what Mr Agyapong said on the television interview.
But reacting in the Citi FM interview, Mr Ayariga said he does not recall having any such conversation with Mr Agyapong.

"Infact John never spoke to us in terms of any medical records. Indeed former President John Dramani Mahama when the issue of Martin Amidu came up gave us the clearance that we could go ahead and approve him to be the Special Prosecutor.