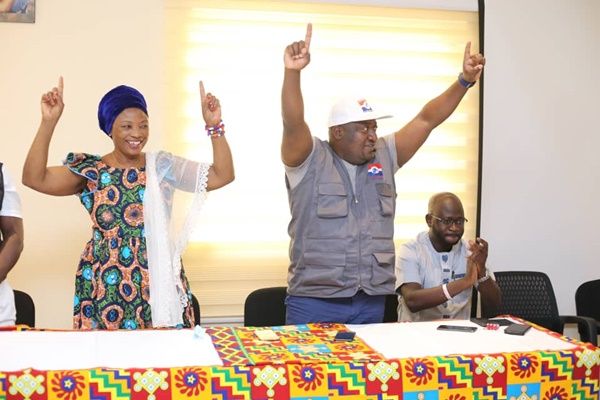 The National Youth Organizer of the ruling New Patriotic Party, Lawyer Henry Nana Boakye who has been touring the Savannah Region stormed Bole/Bamboi Constituency, the home Constituency of the presidential candidate of the opposition National Democratic Congress, John Dramani Mahama.

Lawyer Henry Nana Boakye who is affectionately addressed as Nana B was specifically in Bole ostensibly to usher into the NPP over 200 supporters of the opposition National Democratic Congress who have ditched their former party to join the NPP in Bole/Bamboi for a resounding victory with the tendencies of attracting massive development to the area.

Addressing the defectors, Nana B thanked and lauded them for settling on one of the wisest decisions in politics. He urged them to vote massively for the NPP's Nana Addo as president of Ghana and Hon David Deima as member of Parliament for Bole/Bamboi Constituency. "Don't vote for a party because of where the presidential candidate or the parliamentary candidate is coming from. Vote for a party that has a real appetite for development," Nana B said.

The Savannah Regional Youth Organizer of the ruling NPP, Raphael Akati Mahama who accompanied Nana B to the Bole/Bamboi Constituency was full of joy and ecstasy. Raphael Akati in his address urged them to live an exemplary life with good traces that will be capable of bringing more supporters of the NDC into the NPP.
The leader and spokesperson of the defectors, Alhassan Anas who spoke on behalf of his colleagues cited the massive infrastructure development in the Constituency and the implementation of numerous social impact mitigation decisions in the country as the rationale behind their decision to pitch camp in the NPP.

According to Anas, John Mahama is their brother who has neglected them over the years. Alhassan Anas also announced that the name of their Youth Group which was "Link Town Group" has since been changed to "Akati Youth Group" They finally pledged and promised to step up the campaign in every corner of the Constituency to make sure that, the NPP wins the Bole/Bamboi Constituency for the first time.