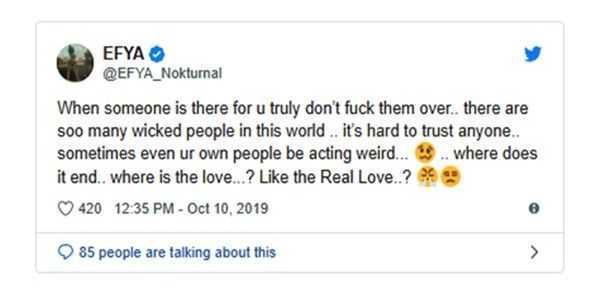 Popular Ghanaian songstress, Jane Awindor who is widely known as Efya has in a recent social media post on Twitter really spoken her heart out about some of the wickedness going on in the world.

According to Efya, this really makes it very hard for people to trust people because of how people act weirdly at times.

She wrote;
“When someone is there for u truly don’t fuck them over.. there are soo many wicked people in this world .. it’s hard to trust anyone.. sometimes even ur own people be acting weird… 🥴 .. where does it end.. where is the love…? Like the Real Love..? 😤😒”