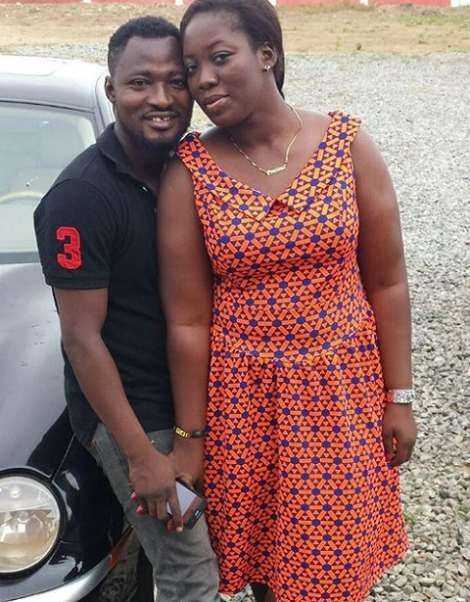 In a video sighted on Nkonkonsa's Instagram page, Funny Face appeared to have bumped into his ex-wife at an event and tried reaching out to her.

He approached her with many people claiming he was making the move in a bid to apologize to her for all that had happened between them.

The comic actor, in the video which is currently going viral, was seen holding the arm of his former wife who is a police officer.

He appeared to be telling off someone when he was mobbed by some fans in his bid to say "sorry" to his ex-wife.

The Kasoa Trotro's ex-wife however appeared unamused and unmoved by Funny Face's antics as she kept a straight face through the whole meeting.

It is still not known if Nana Adjoa will or has already forgiven Funny Face after their recent meeting.

Funny Face and Nana Adjoa made headlines when they announced their separation in 2016 following a beautiful marriage ceremony.

After they separated there were many allegations and counter-allegations that came from both sides.

Watch the video below:

#PRESSPLAY: Comedian @therealfunnyface trys to apologise to his ex-wife in public. . The "Cow and Chicken" actor was captured trying to apologise to his ex-wife Nana Adwoa but she didn't look too amused with her ex-husband's somewhat public display of affection towards her. . Funny and Elizabeth Nana Adjoa Ntim, who is a police officer, brought their sweet, envious marriage to a shocking end in 2016 following allegations of infidelity on the part of the woman. . On Wednesday February 12, 2020, Funny Face decided to let all his anger and hatred for his ex-wife go. In a social media post, he revealed that he had ‘harboured so much hatred and anger’ towards his wife but after a morning devotion and prayers, he felt deep in his ‘spirit’ that he should publicly forgive her. . He asked for forgiveness for all the insults they traded during their divorce period, but his ex-wife hasn't made any comments about his social media apologise so he decided to confront her in public yesterday during the Adonko Next Level Energy Drink launch in Accra.