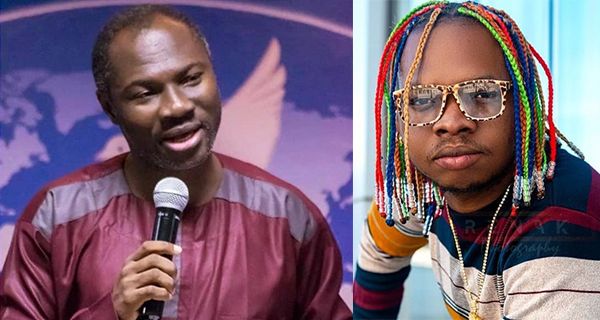 Nana Tornado, real name Emil Nana Wood, has thrown a challenge to the General Overseer of Glorious Wave International, Prophet Emmanuel Badu Kobi to swear by the gods of the land that he never accused Rev. Isaac Owusu Bempah of engaging in ritual killings.

One could recall that there is an intense friction between Afia Schwarzenegger and singer Mzbel as they keep dragging each other through the mud.

Afia Schwarzenegger, in a recent interview on Neat FM's 'Entertainment GH' with Ola Michael, narrated why she and her once upon a time, best friend, are today enemies.

In her account, she disclosed that Mzbel snatched her boyfriend by having sex with him while she (Afia) was still in a relationship with the guy.

Afia further made several allegations against Mzbel and dared the latter to say ''fi'' and she wouldn't hesitate to spill the beans on Mzbel.

Mzbel, reacting to Afia's allegations, welcomed her challenge and also dared her to tell it all about her if indeed Afia has anything to say regarding her but the beef abruptly ended on social media after the two had back and forth altercations.

It was during the heat of the moment that Tornado also inset himself into the fray and took it to another level.

He spewed venom on Afia Schwarzenegger but what really caught the attention of social media followers is his allegation that Prophet Badu Kobi was financing Afia to do all manner of uncouth things against the Founder and Leader of the Glorious Word Ministry International, Rev. Owusu Bempah.

Following Tornado's accusations, Prophet Badu Kobi's lawyers threatened to sue him if he doesn't retract and apologize for what they termed as defamation of the man of God's character.

“We act as lawyers for Prophet Badu Kobi, General Overseer of Glorious Wave International Church located at Sakumono, and upon whose instructions we write this letter. We are instructed by our client that on 7th October 2020 his attention was drawn to a video that had gone viral on social media and in which you made or published material which you knew and/or ought to have known was false, malicious and defamatory of his character.

“Pursuant to our client’s further instructions, we, by this letter demand a full retraction and apology for the said false and malicious publication within 72 hours of the date of this letter. In the event of your failure to heed to this demand, we have our client’s peremptory instructions to institute legal action against you for the publication of the said defamatory material made by you against our client,” the lawyers said in a letter dated 9th October, 2020.

But Tornado, speaking to Ola Michael on ''Entertainment GH'', has refused to render the apology.

He insists everything he said regarding Prophet Badu Kobi is the truth.

During his submissions, he reiterated his accusations and invited Prophet Badu Kobi to the shrine of antoa to swear under oath that he never told him and Afia that Rev. Owusu Bempah was organizing for the killing of some people.

Tornado also rubbished the possible legal suit against him.

''He (Badu Kobi) was my Pastor at that time when I was a Christian and when we go there, there are deals going on. At that time, he had a fierce conflict with Owusu Bempah; so he would give Afia money to rain insults on Rev. Owusu Bempah. It wasn't once, twice or thrice. I said it; it's not that somebody said it. I'm there, so why are you telling me to go and apologize?'', he queried.

He also added salt to injury by revealing more things that the Prophet allegedly said about Rev. Owusu Bempah when he (Tornado) and Afia, on multiple times, would have a hangout with him at a joint in Spintex, Accra.

''He even alleged that Rev. Owusu Bempah is an evil man but he has been there to witness Rev. Owusu Bempah organizing some killings. So, do you think I will come and sit here, and lie? I'm a free thinker. If he says I'm lying, me, I don't do Bible. We should go to antoa or ayigbe to swear if he hasn't even told me and Afia that he was there when Owusu Bempah organized for somebody to be killed. Didn't he say it? I didn't know Owusu Bempah by then, so why am I going to defend Owusu Bempah?''

The 'free thinker' Tornado consistently refused to heed the call by host Ola Michael to retract his words.