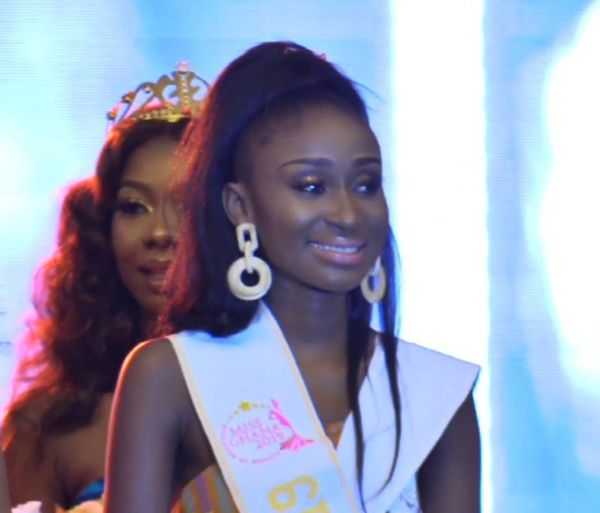 After being called names and trolled by Ghanaians for her looks, Miss Ghana 2019, Rebecca Nana Adwoa Kwabi rubbished suggestions she is ugly.

The Queen, together with her runner-ups, came under huge criticisms after photographs of them during a Television interview was circulated on social media.

The despicable comments about their look, with many calling them “ugly” got them trending on social media for over 24 hours. According to these trolls, the standards of the awards had fallen and the Queens do not qualify to represent Ghana as beauty Queens.

“Do I look ugly? I am not ugly, my mirror doesn’t tell me I am ugly. I am not ugly o,” Rebecca Nana Adwoa Kwabi reacted in a conversation with Joy News.

She added, “everything that has a future, people rise against it so I am cool. I am just watching what they [Ghanaians] are doing.”

Rebecca, together with her runner ups and Mr Ghana 2019, graced the launch and nominees announcement of the 5th edition of the Golden Movie Awards.

“People called advising me but I told them I was cool. Even [President] Akufo-Addo, they insulted him, Jesus Christ, the ultimate person, he has been insulted, so how much more me, a mere person,” she stated.

Explaining what may have happened on the day the picture was taken of them during the interview on CitiTV, 1st runner up, Sarah Odei Amoani attributed it to “a bad day”.

“We had a lot going on the day before. Every girl gets a bad hair day, a bad makeup day, a big dress day so it happens,” she added

Sarah stated, appearances are deceptive, hence, people should make an effort to look beyond appearances.

“Beauty comes in a different form.”

“Ghanaians are known for this,” was the response of the 2nd runner up, Deborah Opoku Sarfo.