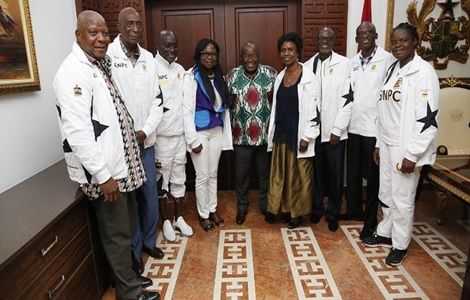 President Akufo-Addo yesterday relished the good old days when Ghana was reputed in the area of athletics.

This was when veteran athletes, who wrote their names in letters of gold for the country and once lifted the flag of Ghana high such as Reks Brobby, Alice Anum, Hannah Afriyie, Mike Ahey, Oko Addy, Ohene Karikari and the famous Emmanuel Tuffuor aka Koora, paid a courtesy call on him at the Jubilee House (presidency).

It was part of their efforts to help qualify Ghana’s 4×200 relay team to the Tokyo 2020 Olympic Games.

The President expressed grave concern about the fact that the name and image of Ghana had gone down in athletics.

He mentioned countries like Jamaica, Uganda, Ethiopia, kenya, Nigeria, South Africa when there is talk about athletics in recent times.

Based on that, he said “really the time has come for us to do something about it.”

He was sensitive to the concerns they expressed about their welfare and virtual neglect by the state, taking into consideration the glory and honour these veteran athletes brought to the country Ghana in their heyday which he said would never be forgotten.

“We have to thank you for the work that you did in the past”, were his words of appreciation.

That, according to the President, was part of reasons he continues to support the work Reks Brobby is doing in not only awakening people’s consciousness about the past but also helping to nurture talents in the world of athletics.

“Athletics has not been on the radar of sports administration in this country for a long time but I’m determined to bring it back”, he said to a spontaneous applause from the veteran athletes.

He said he has since been speaking to the Minister of Sports in that regard. He also promised to help address the concerns of the old athletes.

On their part, the veteran athletes pledged their commitment to help unearth and develop new talents to put Ghana’s name back in the area of athletics.