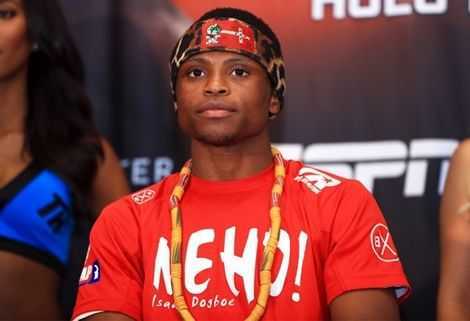 Coach Kwasi Ofori Asare, onetime trainer of Isaac Dogboe, says the former world champion must find an antidote to Emanuel Navarrete’s reach if he is to reclaim his title.

Coach Asare, who handled the young boxer briefly during his amateur days with the Black Bombers, noted that the long reach of the Mexican, 24, who defeated Dogboe in December last year to snatch the World Boxing Organisation (WBO) super bantamweight title, was pivotal in that victory.

The two face off again at the Convention Centre, Tucson, Arizona, in the US on May 11 and Mr Asare believes the Ghanaian, also 24, must get his tactics right.

“Dogboe must be technically and tactically up there. He must fight like a warrior and maintain his self-discipline at all times throughout the bout,” the national team coach Asare told the Daily Graphic in an exclusive interview yesterday in Accra.

According to him, Navarrete will maintain his style of jabbing and punching at a distance, using his reach and height advantage.

He said for Dogboe to counter that, he must close his opponent down and cut off the reach he utilises to his advantage.

“Emanuel Navarrete is a smart boxer. He would resort to the same smart way which made him victorious, so Dogboe must be on his thinking feet throughout the fight,” he noted.


The defeat was Royal Storm’s first loss in 21 fights since turning professional.

Navarrete will be defending the title for the first time and has vowed to stop Dogboe next Saturday.