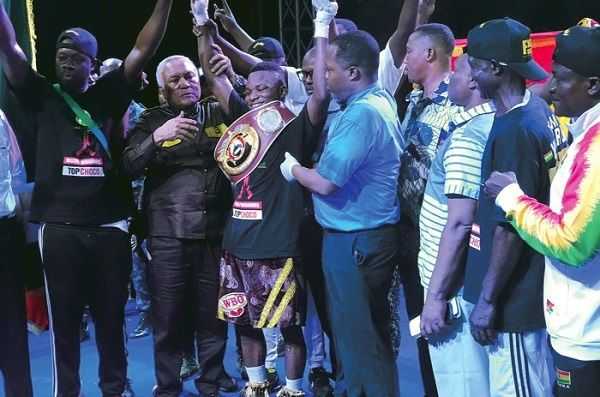 Gyatabi landed ferocious combinations in the fourth round to stop a durable fighter in Amuzu during their headliner on the Bukom Fist of Fury bill. In a fight which proved to be a one-sided bout, the Ghanaian fighter dominated his opponent from the opening bell with power punches until he got his deserved stoppage win in front of his home crowd to defend his title.

Speaking after his emphatic victory on the night, Gyatabi said he wanted to fight WBO world titlist Emanuel Navarette for a showdown in a world championship and promised to end the Mexican’s dominance in the division. The hard-hitting puncher reiterated his desire to become a world champion and said he was hopeful of making Ghana proud should he get the nod by the close of the year.

“I think I am ready to challenge Navarette because it is time to end his dominance in the division. This is my time to do it for my country.
Opening round

Gyatabi began the opening round on a bright note with clean shots to Amuzu’s body but the Beninois stood firm to avoid any slip up. He came close to finishing Amuzu off in the final stages of round one when his combinations troubled and dazed his opponent. Amuzu came into the second round prepared to trade punches with Gyatabi but a right hook by the Ghanaian caught him off guard and nearly dropped him to the canvas.

He, however, managed to keep the attacking Ghanaian at bay despite receiving several power punches.

In the third round, Amuzu landed some right hooks to the chin of Gyatabi but the hungry champion went straight at him for the kill but failed to record a knockdown. Amuzu took a bad decision to trade punches with Gyatabi in the fourth round as the latter landed a powerful right hook to put his opponent on the ropes. He failed to survive this time around after Gyatabi followed up with combinations that sent him crashing to the canvas, leading to referee Erasmus Owoo stopping the fight.

The punches were so severe that Amuzu fell and needed over 15 minutes to be revived by the medical doctors at the ringside. The win improved the Ghanaian’s unbeaten record to 13 wins from as many fights, with 12 knockouts as well as earning him a successful first title defence of his WBO Global crown.

On a night which saw Gyatabi headlining the second edition of the Bukom Fist of Fury, Jessie Manyo Plange defeated Sharif Kareem of Nigeria in a technical knockout after five rounds to win the PBC super flyweight title.

In other professional bouts of the Bukom Fist of Fury which was organised by the Ghana Boxing Federation (GBF) and Ghana Boxing Authority (GBA), Prince Oko Nartey lived up to the billing against Philip Kweku with a round one stoppage win in a super middleweight contest while Mubarak Abubakar travelled the distance to beat Michael Darko in a unanimous decision.

Fans favourite Faisal Abubakar stopped Nii Akrofi in just a round to win a super lightweight contest in the final event of the evening.

Meanwhile, the boxing league which is being put together to unearth and nurture talents in the sport saw several juvenile and amateur fighters nationwide getting the nod to prove themselves.