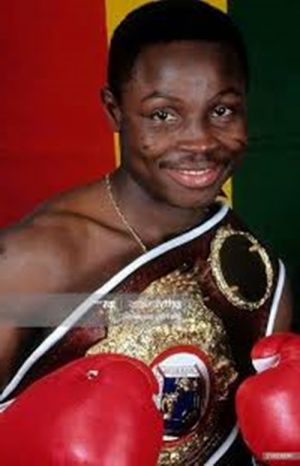 The demise of Alfred Kotey hit the boxing fraternity so hard even when he had stayed out of the sport for some time. Being the only world champion from Ghana to have died, several tributes have poured out from all walks of life.
His career which was expected to blossom failed to reach higher heights despite winning the World Boxing Organisation (WBO) bantamweight crown in 1994. In fact, the inconsistencies in Kotey’s 24-year professional career destroyed a bright start.

Kotey may have died but his legacy as one of the most skillful fighters in the nation’s history remains intact. It is what defined him and made him standout among his generation of boxers.

This quality was acknowledged by his closest ally, Ike Quartey, former International Boxing Federation (IBF) welterweight titlists. He was very emphatic in his tribute to his late friend.

“Alfred was a very talented boxer. I have known him all my life and his skills in the ring were always a delight to watch. He was a boxing gem that must be celebrated,” Quartey told Graphic Sports.

“I will forever miss him because he was my boxing friend who motivated me to become one of the best from Ghana and Africa as a whole,” he said.

Alfred Kotey had a very impressive amateur career with the Black Bombers. He was a prominent figure in Ghana’s team that participated in the 1988 Summer Olympics in Seoul.


A 20-year-old Kotey was only denied a medal through injury having reached the medal zone at the games. The performance prompted Yoofi Boham to sign him on as a manager and promoter towards his professional career.

“I remember how Alfred Kotey missed out on the Olympics medal due to an injury he sustained during the competition. He got to the medal zone of the Olympics but couldn’t compete because he was injured,” Mr Boham told the Graphic Sports.

“He was an exceptional talent so I decided to sign him on and that started our relationship,” he said.

The professional career soon blossomed in 1988 with Kotey winning his opening 16 professional bouts with 12 knockouts. He would go on to lose in his next outing against Julio Cesar Borboa in 1992.

Kotey came back stronger in two years to defeat Chris Clarkson which earned him a world title shot. It was against Rafael Del Valle of Puerto Rico.

“He really made me proud by winning the world title. I knew he had what it takes to become a champion and he proved that to me in that fight,” said Mr Boham.

The world title would not last. After two successful defences, Kotey lost it to Daniel Jimenez in 1995. That became the end of his career after series of inconsistent results.

“He was focused and committed to training when he was in Ghana and the United Kingdom (UK). Kotey changed when I took him to the United States (US) and that really affected his career,” he explained.

“He became lazy and wasn’t training regularly. I know he could have reigned for long if not for what he turned out to be in America,” he added.

In 2012, Kotey made his final ring appearance against his compatriot, Frederick Lawson, at age 44. He later relocated back to the US until his death on June 30.

It was a sad end indeed and I support appeals by the late Kotey’s family for government to help them airlift the former boxer’s remains back home.

Having contributed immensely to the sport, Kotey deserved a befitting burial by the state, especially when he remains the only world champion to have died.

Quartey, his closest ally in boxing, has paid a glowing tribute to a ‘brother’ who he said contributed immensely towards his achievement in boxing.
He said the late Kotey would continue to be his brother even in death.

“It’s been very difficult for me these past few days since his passing. Everyone in boxing knows my relationship with Alfred Kotey. He was a brother and my boxing partner.”

“He was the one who motivated me into becoming one of the best fighters to have come from Ghana. I will forever miss him and even in death, he remains my brother.”

Kotey’s eldest son, Derrick Kotey, a promoter with Ambition Boxing, described his father as a very humble and respectful fellow who possessed a great sense of humour.

Derrick referred to his father’s demise as a very painful loss not only to the entire family but the boxing fraternity as a whole.

“He was very humble, respectful with a great sense of humour. It’s been very difficult for the entire family but we know it is a great loss to the entire boxing fraternity,” Derrick noted.