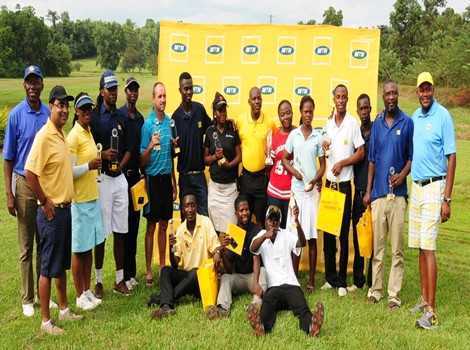 The MTN CEO’s invitational golf tournament has been organized at the Damang Goldfields Golf Course in the Prestea Huni Valley district of the Western Region where 83 golfers from various golf clubs participated in the 18 hole tournament.

Mr. Serame Taukobong, Chief Executive Officer of MTN Ghana, in his address noted that the Invitational Golf tournament was instituted to enable MTN get closer to its corporate clients, interact with them in an informal setting and get a better understanding of their telecommunications needs and preferences. He shared highlights of activities being undertaken by MTN to achieve its vision of leading the delivery of a bold new digital world.

Mr. Taukobong also expressed his appreciation to all the golfers for their massive turn up which is indicative of the commitment to further strengthen the relationship that exists between MTN and the corporate clients in the mining communities. He congratulated executives of the Damang Golf Club and the winners of the tournament for their sterling performance.

The resident coach at the Damang Golf club, Mr. Jackson Chichi, described the tournament as successful and the best competition they have witnessed since the beginning of the year. He commended MTN for the impressive organization of the tournament adding that the turnout was greatly beyond the usual recording of 60 participants. He stated that the participation was good for the future of golf in the region.

Alfred Baku, Vice President of Goldfields Ghana Limited in a brief remark expressed gratitude to MTN for visiting the Damang Golf Club and called for more collaboration in future to strengthen the existing relationship between MTN the mining communities.

The MTN’ CEO’s invitational golf tournament was initiated in 2009 and has already witnessed six successful editions hosted by the Achimota, Celebrity and the Tafo Golf Clubs in the Greater Accra and Eastern Regions respectively.