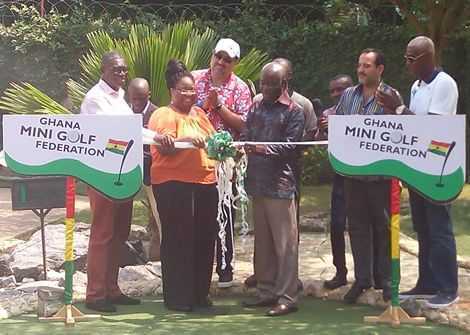 The Ghana Minigolf Federation has officially announced that nationwide registration is now open to all persons interested in becoming members of the sport.

The Federation president, Mr Talal Fattal noted as the latest addition to Ghana sports, there was the need to regulate the minigolf sport industry so as to ensure growth, discipline & professionalism amongst current minigolf players & stakeholders.

Explaining the modalities for the registration, GMF Ag. Sec. Miss Nicholina naa botchway advised that registration forms can be obtained at the Federation’s secretariat, house no.6 Ridge - opposite electoral commission of Ghana, or Metro TV Offices Labone, or the Marvels Minigolf club at Dzorwulu - all in Accra.

Miss naa botchway stressed that membership was open to all interested minigolf players, beginners or fans nationwide, both male and female, over age of 17 years with the annual membership payment giving as bonus - free entry to the first Ghana minigolf league starting December 17th - Feb 4th with final 24 players eligible to take part in the world cup series next year in Portugal, Kosovo & Croatia.

She therefore urged the general public to take advantage of this opportunity and register to become members of the Ghana minigolf Federation.

For the 2017 membership registration, the federation has projected about two hundred members that will be categorized according to three different age brackets i.e. juniors (under 20 years), adults (no age limit), and seniors (over 45 years).

Successful applicants will be issued with renewable laminated membership digital print IDs valid for one [1] year.

The president of GMF, Mr. Fattal also revealed that membership of the Ghana Minigolf Federation automatically induct members into both the African and world minigolf governing bodies of the sport, thus assigning GMF members, exclusive rights to participate in international minigolf tournaments and competitions.

The Ghana Minigolf Federation was recently launched in Accra under the auspices of the Ministry of Youth and Sports. The federation is being run by a President and four-member Executive committee.