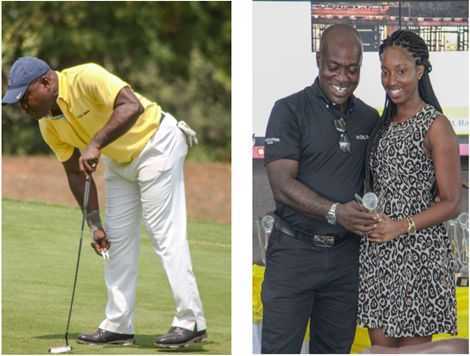 Playing with a handicap of 5, the golfer brushed off competitors, including Sampson Asogbah and Eddie Addo, to gross 74 to win the 18-hole event.

The obviously elated Gedze teed off well and managed to navigate his strokes through the course before finally parting into the pin from the greens to win the Group A event.

It was, however, a disappointing moment for the runner-up,Sampson Asogbah, who missed the ultimate with one point. Asogbah who played with a handicap of two, grossed 73 while Eddie Addo picked the third position with a gross of 84 on handicap 11.

Madam Amponsah Mensah continued to show class as a dominant force in the female golf when she distinguished herself from stalwarts like Felicity O. Gyeabour to win the female category.

Madam Mensah grossed 87 with her handicap of 13 to stun favourite, Felicity O. Gyeabour ,who followed with a gross of 84 and playing with handicap of 11. Constance Awini had to settle for the third position after she was beaten on count-back by Gyeabour. Awini grossed 84 with a handicap of eight.

Mr Michael Asante won the male Group B category with a gross of 93, followed by Jessie Ababio and Japhet Achiola with gross of 88 and 89 respectively.

In the female Group B, Mariatu Bah won with a gross 96, followed by Afia Konadu and Niine Sarpong, who followed in that order with a gross of 103 and 112.

The outgoing captain, Mr Adu Jnr, in a farewell address called on members to support the incoming captain and also help to deal with the challenges confronting golf as a sport.

Winners in the various categories took home trophies and souvenirs.