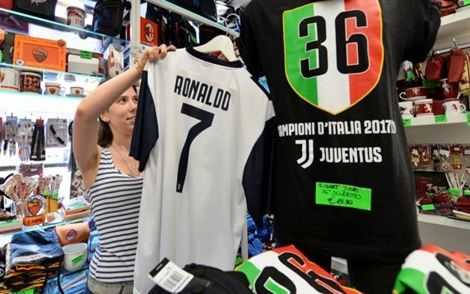 Workers at a Fiat Chrysler plant in Italy are to strike after its main investor decided to pay €112m (£99.2m) to sign footballer Cristiano Ronaldo for Juventus.

Both the football club and the carmaker are controlled by the Agnelli family through their holding company.

For the USB union, the decision means Fiat is missing out on investment.

It said the firm needed to guarantee the future of thousands of people, "rather than enriching only one".

The union added that it was "unacceptable" that while Fiat Chrysler workers were making "huge economic sacrifices", millions of euros were being spent on the purchase of a player.

The four-year deal to woo Ronaldo from Real Madrid was announced on Tuesday amid concern that Juventus might have overpaid for the 33-year-old forward.

However, football finance expert Rob Wilson, of Sheffield Hallam University, said Juventus should earn more than enough money from Ronaldo to cover the transfer fee and his wages.

He added: "The marketing leverage that Juventus will be able to create will be significant. Added to that the likelihood that he will strengthen the team, it seems plausible that they will be more successful domestically and qualify routinely for the Champions League. That means more sponsors, more TV money and more prize money."

Born on the Portuguese island of Madeira, where the airport is named after him, Ronaldo has had a successful career at Real Madrid, scoring 450 goals in 438 games for the club.

As captain of the Portuguese team in the 2018 World Cup, he scored four goals, including a hat-trick against Spain. Portugal made the last 16 of the tournament, in stark contrast to Italy, who failed to qualify for the first time since 1958.

Limited impact
Although Juventus and Fiat Chrysler are run as entirely separate businesses, they are both controlled by Exor, the investment holding of the Agnelli family.

The USB union has called for a strike at the Melfi plant in southern Italy, which makes cars including the Fiat Punto and the 500X.

Its members will walk out at 22:00 local time on Sunday and remain on strike until 18:00 on the following Tuesday.

However, the impact of the stoppage is likely to be limited. The factory is just one of seven Fiat Chrysler plants in Italy and the USB does not represent many workers there.