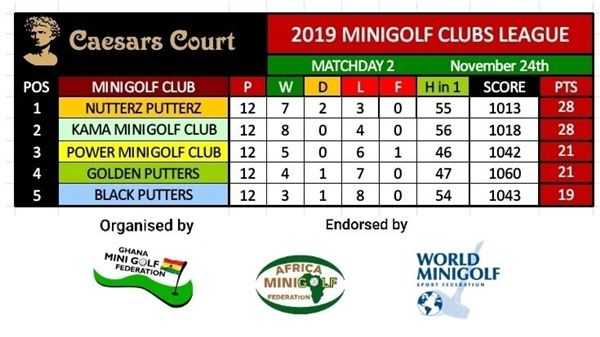 The 5-week competition coined ‘CAESARS COURT 2019 Clubs League’, is made up of 5 minigolf leading Clubs in Ghana all vying for the ultimate 2019 cup on Dec 15th, and they are:
Nutterz Putterz club
Kama Club
Power club
Black Putters
Golden Putters

Each club competed with 3 duo players Teams and played 6 matches on the day.

Nutterz Putters is Leading the League table now with 28 points and total score of 1013 .

Golden Putters and Black Putters Minigolf Clubs came in 4th, and 5th position with 21 and 19 points each consequetively.

For Best Stroke Play on Matchday 2...Ruben minko of Kama club for the second week in a row scored lowest with 74 points for his Two Games whilst power club duo Solomon Lokko & Fofana mutawakil logged best combined score of 150 points to win prize of best clubs duo for MATCHDAY 2

The 5 weeks Minigolf Clubs League, is sponsored by Caesars Court Ridge and is expected to have a total of over 100 matches by end of the League on December 15th, where the champion club will be crowned along with individual players who have competed with excellence throughout the 5 weeks competition.

The 2019 'CAESARS COURT Clubs League comes off at the heels of TEAM GHANA’S participation at the recently ended 2019 World Minigolf Championships in China, where Africa’s Best Minigolfer, Enock Nyarko found himself on the 101st position from a total of 230 players from 26 countries.

The GMF Clubs League Matchday 3 continues this Sunday 1st December 2019 at Caesars Court Ridge minigolf course with competitive fixtures that will Tee off at 3 pm.