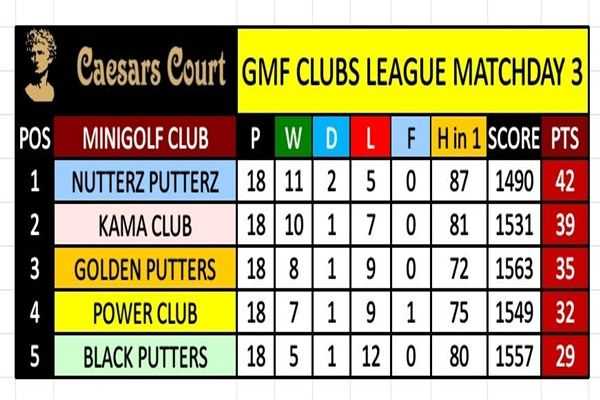 Nutterz Putterz Club maintained its No.1 position on the League Table of CAESARS COURT 2019 MINIGOLF CLUBS LEAGUE with 42 points that stretched their lead by 3 points from Kama Minigolf Club who placed 2nd with 39 points

The Two Clubs have become very competitive and will clash in 3 fixtures this Sunday MATCHDAY4 that might produce NUTTERZ PUTTERZ as 2019 Potential Clubs League Champions or KAMA club catch up for a two horse race showdown at the final homestretch of next week Sunday MATCHDAY 5, Dec 15th.

The 5 weeks GMF Minigolf Clubs League which started on Nov 15th is sponsored by CAESARS COURT Ridge and will compete a total of 150 matches by end of the League on December 15th, 2019 where the champion club will be crowned along with individual players who have competed with excellence all through the 5 weeks competition.

The 2019 'CAESARS COURT Clubs League comes off at the heels of TEAM GHANA’S participation at the recently ended 2019 World Mini-Golf Championships in China, where Africa’s Best Minigolfer, Enock Nyarko found himself on the 101st position from a total of 230 players from 26 countries.