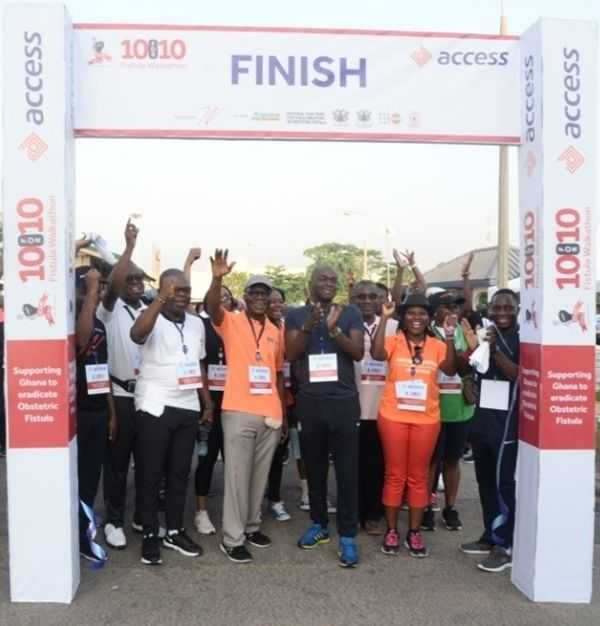 Access Bank Ghana has held a day’s Walkathon across the country in furtherance of its commitment to funding the fight against Fistula in the country. The “Fist against Fistula” campaign, is part of the Bank’s larger objective to support Ghana in meeting the United Nation’s Sustainable Development Goals (SDGs) and in response to the high incidence of Fistula cases in Ghana.

The 10-kilometer walk, signifying the Bank’s 10 year Anniversary celebration in Ghana, was aimed at raising awareness and securing charitable funds for the National Task Team for the Elimination of Obstetric Fistula, which has been mandated to oversee and coordinate fistula interventions in the country.

The walk began in over 10 regional locations including Accra and Kumasi, where major walks were organized. Overall, the event brought together over 1,300 guests, partners, customers, community leaders and employees of the bank. Gracing the event were several dignitaries including the Deputy Minister for Health, Tina Gifty Naa Ayeley Mensah.

“In August last year, Access Bank launched its campaign dubbed “Fist against Fistula” to help treat women affected with the disease and reintegrate them into the society. I am happy to announce to you that our Bank has successfully financed the treatment of 100 Fistula patients at the Mercy Women’s Catholic Hospital in Mankessim, one year on”.

He noted that the time was now right to collaborate with a lot more stakeholders in Phase Two of the campaign to enable the Bank intensify the advocacy, help remove the stigma and attract funds to finance more surgeries for affected women” he concluded.

In a speech read on her behalf, the Minister for Gender, Children and Social Protection, Cynthia Mamle Morrison was full of appreciation for the massive exercise and awareness campaign instigated by Access Bank.

She said that though significant gains have been made in advancing the welfare of women and children in the country, there is still a lot more to do and Government is committed to meeting all the targets set under the UN Sustainable Development Goals, with the help of critical stakeholders such as Access Bank.

“We are using our award winning Employee Volunteering Programme (EVP), which gives us a footfall of more than 1,000 volunteers to garner more support for this initiative. Everyone should really desire the opportunity of being part of the story we are writing in Ghana’s history to kick out Fistula for good before 2030”.

On his part, Professor Anyetei Tonyeli Lassey, Chairman of the National Task Team for the Elimination of Obstetric Fistula, which operates under the Ghana Health Service, indicated that the growing incidence of obstetric fistula cases in the country – currently over 1,300 cases annually, was worrying and required a concerted effort from well-meaning corporate bodies to address the issue.

“We thank Access Bank immensely for spearheading this fight and involving key stakeholders to drive this campaign. I also want to use this opportunity to make a clarion call for more corporate bodies to join in this fight” he concluded.

Partners for this campaign include the Ministry of Health, the Ministry of Gender and Social Protection, National Task Team for the Elimination of Obstetric Fistula, The United Nations Population Fund (UNFPA), Kaysens Gaisie Limited, Kasapreko and the Mercy Women’s Catholic Hospital among others.

Since 2010, Access Bank has received several local and international awards in recognition of its role championing sustainability and promoting corporate social responsibility. The Bank’s enviable CSR Awards include 2018 Best Company in Employee Volunteering Initiative (SSI Awards), Winner of the 2019 Karlsruhe Sustainable Finance Awards - Outstanding Business Sustainability Achievement, Special Recognition Award in Sustainability Banking in Africa and the Brandcom Award for Best Brand in Sustainability among others. Very recently, the Bank received the “Health Project of the Year” award for its life-changing “Fist Against Fistula” initiative.