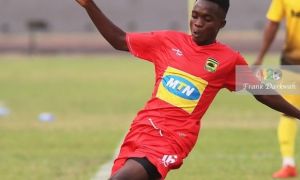 Kumasi Asante Kotoko have been handed the first option to extend the contract of wonderkid, Matthew Anim Cudjoe, whose one-year loan deal expired at the end of the season.
The manager of the 17-year-old gifted midfielder, Samuel Anim Addo, told Graphic Sports in an interview last Saturday that he was open to fresh negotiation for contract extension with the Porcupine Warriors as soon as they were ready.

''We have not resumed negotiations yet but Coach Maxwell Konadu occasionally calls to discuss the boy with me,'' Anim Addo, who is also an Executive Council member of the Ghana Football Association (GFA), revealed.

He, however, could not explain why the club had delayed in negotiating for a new deal with the youngster, except to attribute it to the recent appointment of the new Board of Directors who might have their own vision for the club.

Despite interest in the young winger by some European clubs, the manager of the player insisted that the boy needed to attain the age of 18 years before he could sign any contract abroad. He, therefore, preferred Kotoko as the first option  should the player continue his career development on the local scene.

Cudjoe will turn 17 in November, and per the agreement with Kotoko, his contract was supposed to expire at the end of the 2019/2020 season.

However, with the cancellation of the Premier League due to the outbreak of the Coronavirus pandemic, it is assumed that his contract had expired and therefore requires a review.

According to Anim Addo, should negotiation begin anytime soon, his main priority would be about how the club would develop the player to become a future star, including getting enough playing time to enhance his potential.

''If they will offer him a good contract we are ready to accept it. "When I say a good contract I am referring to an offer which will help develop the player and also get him enough playing time'', he stressed.

He said he was ready to meet the management of the club as and when they were ready to open talks for a review of the deal.

The sensational Cudjoe, who joined the Kumasi-based club at the beginning of the 2019/20 season, was mainly used by Coach Konadu as a super-substitute who usually thrilled fans with his sublime skills.

He is well remembered for his immense contribution to Kotoko's 1-0 win over arch-rivals, Accra Hearts Oak, in their first round league game at the Accra Sports Stadium.

Anim Addo emphasised that the player's European move was still pending, hence he could easily switch once he attained 18 years.