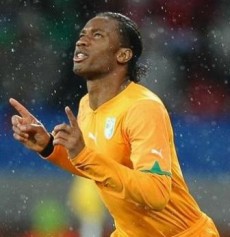 Ivory Coast football legend Didier Drogba is set to shake the foundations of the country's game as he is seriously considering submitting his candidacy for the FA presidential election.

The former Chelsea superstar is in the final stages of officially announcing his decision to contest November's election.

With just three months to the elections, Drogba will pose a serious threat to Augustine Sidi Diallo who currently holds the post.

The former Marseille attacker is considering the idea of running for this position despite the strong friendship between him and the current president of the federation.

The former African Footballer of the Year award winner is reported to have already floated the idea to advisers who are now consulting the major stakeholders in the game for their feedback.

He also already secured the support of players in the country with only the clubs and political authorities left for him to unseat Diallo who is seen as a strongman of Ivorian football.

The most likely option for unseating Diallo would be for Drogba to partner with businessman Malick Toue who is frontrunner with several clubs already offering their support to the cocoa magnate.

It seems Drogba wants to get closer to African football in the coming years, especially after he became the technical adviser to Ahmed Ahmed, president of the Confederation of African Football.

The Ivorian has been the owner of American second tier club Phoenix Rising since 2017.