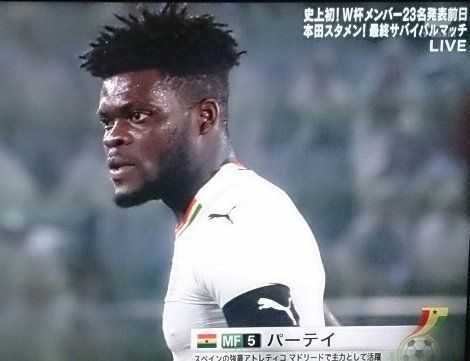 Ghana midfield superstar Thomas Partey suffered his second robbery attack in Spain in less than one week when thieves stormed his house on Saturday night, Ghanasoccernet.com can exclusively reveal. The Atletico Madrid playmaker's house in the plush neighbourhood of Madrid was attacked by the armed robbers again after travelling earlier in the day with his team-mates to Valladolid.

The player was not in danger because he was in Valladolid preparing with his team for their La Liga match on Sunday.

The robbers failed on their latest mission as they were thwarted by the sister of the player who was then present in the house - just four days after the house was raided in similar style.

The player's sister was on the property when the assailants raided the house and when they were inside they realized her presence and backed off.

The robbers took to their heels because the sister alerted the police who responded with speed only to see the thieves escaping on foot.

She alerted the police and this caused the two attackers to flee empty-handed.

The episode was repeated only four days after the thieves surprised an employee of the footballer's home and took a significant sum in cash and different valuables.

The two hooded thieves repeated the modus operandi, trying to storm the house with intimidation but this time they failed to complete the robbery. Just last Monday evening, the player's house was ransacked by the thieves when his housekeeper was inside.

The Ghanaian midfielder was a victim of the wave of robberies in the homes of the players this week, while he was in Moscow to play the Champions League.

Partey is the latest victim of the wave of robberies in the homes of players in Spain.

After all, thieves need only consult the Spanish league calendar to find out which houses are most vulnerable each day of the week. This time Thomas was wary and unscathed.

A week ago, on Saturday, Casemiro also suffered an assault while the Real Madrid footballer played the derby against Atlético de Madrid. The assailants fled the house with watches, jewelry and some digital gadgets.

Casemiro was robbed during the derby with Atletico, but before the Real Madrid player had been victims of assault Zinedine Zidane, Benzema, Isco, Lucas Vasquez, Morata, Kondogbia, Jordi Alba, Arthur, Coutinho, among others.

The wave of assaults has spread throughout Spain in recent months and has affected players from different La Liga teams such as FC Barcelona, ​​Villarreal CF, Real Betis or Valencia CF.