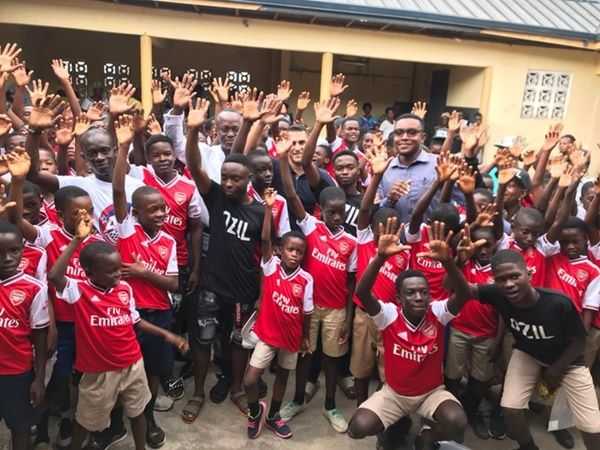 Arsenal and former Germany international Mesut Ozil has expressed his delight by the renaming of a Ghanaian youth club after him.

A post on social media shows a gathering of excited kids clad in Arsenal jerseys, all with the player's name written on their backs.

Also among the gathering is his agent Erkut Sogut.

"Abiriw Ozil Football Club. Nice to have a football club named after me in the Eastern Regional town of Abiriw in Ghana. Glad to see you all smiling in the @arsenal & #M1Ö shirts. #YaGunnersYa," Ozil tweeted on Tuesday.

Although there has been little information about the meeting, reports state Ozil, through his agent who was on a two-day working visit to Ghana, made a presentation of 80 signed jerseys to Young Boys FC, a youth club in the Eastern regional town of Abiriw.The club then, in appreciation, renamed the outfit to Abiriw Ozil FC.

"I'm a deliverer of his message, I'm here for him [Ozil] because he can't be here so I'm a messenger for him. He gave me his word to do this with Daniel [Akowuah] together," Sogut said during the presentation, according to Ghana Guardian.

"So we are here to deliver his message, to share with the kids, the young ones, give them vision and dreams to follow them, work hard and hopefully achieve them."

Ozil was in action as Arsenal registered a 3-1 away win over West Ham United in the Premier League on Monday.