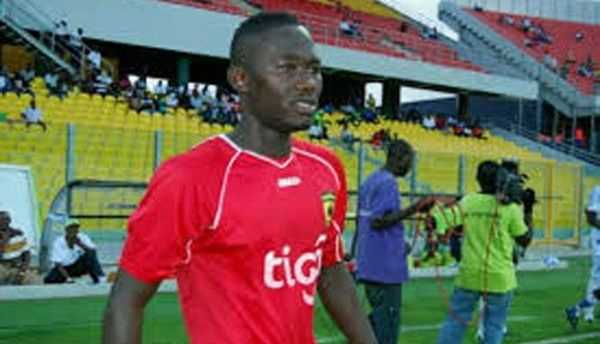 Former Ghana international and one-time Ghana Premier League top scorer Eric Bekoe reveals he is ashamed by the superstitious conduct of his former club Asante Kotoko during their league clash with Aduana Stars on Wednesday.

It was a game of bizarre scenes as both clubs fielded 10 players each for the first-half, believing that whichever club was first to put 11 players on the pitch would end up losing the Matchweek 11 fixture in Dormaa.

With neither side ready to take the big step, the two teams held on to a member of their starting XIs on the sidelines, portraying that the players picked up injuries just before kick-off and were receiving treatment while waiting on each other to send on the 11th man.

Visiting team Kotoko ultimately ended the game on the losing side as Samuel Bioh’s strike in the fourth minute of injury time won all three points for the hosts in dramatic fashion.

“As a former player of Kotoko, I’m deeply ashamed by what happened and I condemn the act because football has come of age. This incident doesn’t speak well of Ghanaian football in the modern age,” Bekoe, who won the league title and the goal-king award with Kotoko in 2008, told Goal on Thursday.

“Players will use more energy when playing with 10 men as against playing with 11. A big club like Kotoko should not have been involved in such an act. This was purely a trial and error and if Kotoko had won, whoever was behind it would have taken credit for the three points.

“A team may even have money set aside for such spiritual acts when players’ salaries are even unpaid. If ‘juju’ [black magic] plays football, then the boys should not even waste time training. If ‘juju’ works, the ‘juju’ man would not tell a team to go and train well while he prays for victory from his corner. It is of no use.

“Football is a mind game. Are you telling me if Real Madrid are going to play Barcelona, they would say they should go onto the pitch a man short to get a spiritual advantage? This is all nonsense. Football is all tactical. If you do your homework well and get to the field, you’ll have no excuses.”

Kotoko, two-time African champions and the most successful club in the history of the league with 23 titles, withheld Martin Antwi on the sidelines while Aduana did the same with Farouk Adams.

Their antics briefly delayed kick-off. Both teams, however, each sent 11 players onto the pitch for the second half.

“I was surprised the coach [Maxwell Konadu] also agreed. And at the end of the day what happened? Kotoko lost! If they fielded 11 men, maybe they could have gotten a draw. When you travel to play for a team abroad, there are certain teams those clubs don’t tolerate.

“When I was at Kotoko, we all depended on hard work because it pays. And even heaven helps those who help themselves. And the player who had to go drop something in the goal net, it’s all nonsense. Your own CEO is a leader or owner of a church and I learnt he has also condemned the act.

“That was also the time the coach should have stood his ground and said ‘no’ to the act. Even if the leadership wanted to do something, they should have done it behind the players. I was so surprised by what transpired yesterday, an unfortunate historic incident.

“It also says a lot about the Kotoko team because the playing body could also have rejected the proposal if they had mature players who could not be manipulated and who believe in hard work and themselves.”

There were other superstitious actions before and during the game.

Kotoko reportedly used an unusual and longer travelling route for their journey to Dormaa for spiritual beliefs concerning the match result. This resulted in Kotoko arriving late at the match venue.

The game was the top-liner of the Matchweek 11 round of games.