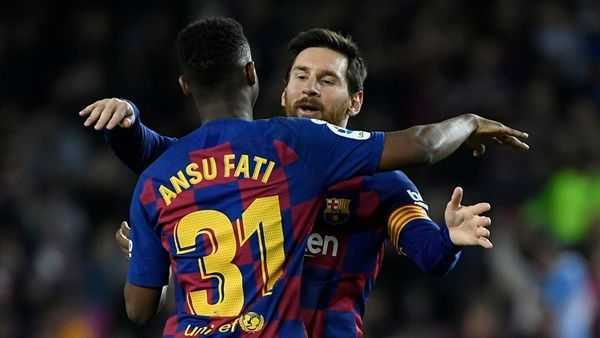 The former Ghana international shares his thoughts on the most exciting young talents in world football.

Former Ghana star Bernard Dong-Bortey has picked Real Madrid teenager Vinicius Junior over Barcelona’s Ansu Fati as the most exciting young player in the world, adding the latter’s development could be hampered by the presence of Lionel Messi at the Blaugrana.

After making his big breakthrough with 18 league appearances last season, Brazil’s 19-year-old Vinicius is on a mission to solidify a place in the Madrid set-up this season, having so far made 19 La Liga outings and netted twice.

Fati is enjoying his own breakthrough at Barcelona this term but after losing the Goal 2020 NxGn Award to Real Madrid’s Rodrygo on Tuesday, Bortey believes 17-year-old Fati could suffer from playing in the shadows of six-time Ballon d’Or winner Messi.

"I watch Marcus Rashford and Vinicius Jnr a lot. I think Vinicius is the most exciting young player for me because to play for Real Madrid is not an easy thing. If you get the chance, you have to play your heart out. Vinicius is even making the first XI. He’ll be a great player one day,” Bortey told Goal on Wednesday.

“Fati is also good but there are the likes of Messi at Barcelona and you can only become the star man when Messi is not there. But at Real Madrid everybody has the chance to shine.”

Bortey won the Caf Confederation Cup with Hearts of Oak in 2005. Yet, he is pushed into the category of ‘what could have been but never was’ as many considered him an under-achiever by his precocious talent exhibited when he burst onto the scene with Ghana at the 1999 Fifa U17 World Cup where he finished the tournament as the third-joint top scorer.

Surely, he knows what it takes to grab attention at a young age.

“Everything is confidence. No matter your age, be it 15, 16. We can see Fati, he’s just a 17-year-old boy. The coach will give you the chance to show what you have but everything will be down to your confidence,” the now 37-year-old said.

“If you have it, you can play with anyone, be it [Cristiano] Ronaldo, Messi or any kind of player. You can see Vinicius Jnr. We have a lot of young talented players who are coming to dominate world football. We have to encourage them.”

For a player who accepts his career didn’t quite turn out as he expected, a word of caution to the likes of Fati and Vinicius should not be taken lightly.

“They would have to be careful with the media hype because hearing your name everywhere can get you swollen-headed. They also have to respect the game. They have to work hard, do self-training and not just rely on team training,” the former Ghana international said.

“Looking at how the coronavirus has ground all the teams, as a young lad, you have to keep training on your own or else you may lose your touch.

“They must respect the people they work with and they must fear God too because he gave them the talent. They must also respect the fans and the media who carry them higher.”

Bortey, who won four Ghana Premier League titles with Hearts and won the league goal-king award in 2002, also played for Al Wasl FC of the United Arab Emirates, Bnei Sakhnin of Israel, Vietnamese side CLB Song Lam and The Panthers of Equatorial Guinea in a series of brief, unsuccessful stints abroad.