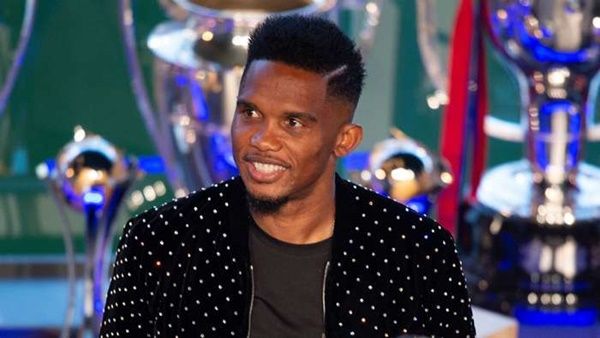 The Cameroonian star was left frustrated after not being recognised as a striker by France Football.

Samuel Eto'o has hit out at France Football after the publication named him as a right-winger in its Ballon d'Or Dream Team.

Eto'o carved out a legendary career for the likes of Inter, Barcelona, Chelsea and Mallorca while also establishing himself as Cameroon's all-time leading scorer and third-most capped player with 56 goals in 118 caps.

However, most of Eto'o's career achievements came while playing as a number nine, with the Cameroon star establishing himself as one of the best strikers in the sport's history

As a result, the 39-year-old former striker says that he felt disrespected by France Football's decision to classify him as a right-winger as part of its Ballon d'Or Dream team countdown.

"Thank you, but I played 1-2 seasons on the right (yet I have 25 years of career as a center forward)," Eto'o tweeted in response.

"The lack of respect. @francefootball WHATEVER!"

Eto'o was recognised among some of the best wingers of all time, with Lionel Messi the only current player named to the list.

Arjen Robben, Luis Figo and David Beckham are among the more modern names on the list, with icons like George Best, Kevin Keegan, Stanley Matthews, Jairzinho and Garrincha also included.

Eto'o announced his retirement in September 2019, having most recently played for Qatar SC.