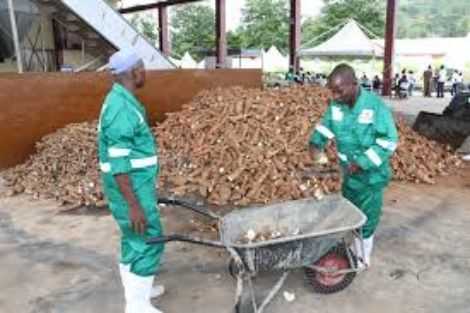 The attention of the management of Tiberias Ghana Limited majority shareholders of the Ayensu Starch Factory has been drawn to news reports emanating from responses given by the Minister of Trade and Industry Mr. John Alan Kwadwo Kyerematen on questions posed on the floor of parliament to the effect that the factory has been closed down and that the ministry and for that matter government was taking legal steps to reclaim the factory.

The said reportage on www.ghanaweb.com and several other news portals and papers suggested the Trade Minister said that   Tiberias, a subsidiary of the Jospong Group had paid only 2.2 million dollars for the 70% shares that government sold to Tiberias and has since refused to fulfil its obligations under the sales and purchase agreement to the extent that it has abandoned the factory.

Management would like to state respectfully, that the presentation made by the Minister did not give a true picture of the facts on the grounds in terms of the operations of the Ayensu Starch Factory and its current state of affairs.

1.Tiberias took over the operations of Ayensu Start Factory in 2016 through a competitive bidding process and acquired 70% with government keeping 30% shares in the Factory.

2.Per the arrangement, the two partners are to set up a Board to oversee the operations of the Factory, for which Tiberias presented members to the Ministry and is still awaiting list of members from the government side to make the board complete.

3.That notwithstanding, Tiberias has gone to great lengths to ensure that the plant is running and workers were paid their salaries from 2016 to June 2018, when government took up some of the payment without recourse to the majority shareholder.

4.So far, Tiberias has invested over 20 million in retooling and refurbishing the factory to improve its operations and increase yield for the ready market because of the quality of starch it produces.

5.The Ministry has also been approached and updated on several occasions on the operational challenges of the plant with a request for a stimulus package as is being done for other companies, this request was however turned down.

6.Upon realizing that there were major mechanical problems due to some fundamental mistakes at the inception of the project Tiberias has apart from paying 2.4 million dollars, invested over 20 million Ghana cedis into re-engineering, refurbishing and, retooling of the plant to make it fully operational. This process is expected to be completed by August, 2019.

7.Also, two international companies one from Denmark and the other a Dutch company based in Thailand, have been engaged to undertake thorough investigations into the frequent breakdown of the plant which has resulted in the dormant nature of the company.

8.Management will in the next few weeks roll out a programme that will reach out to critical stakeholders such as out growers and customers to provide a road map to the resumption of full operations. A process that will restore confidence in the operations of the company.

9.Additionally, Tiberias has acquired over 10,000 acres of land to ensure that once the mechanical problems are resolved there will be constant supply of the raw material (cassava) to feed the factory.

10. Tiberias has since taking over the plant made a lot of overtures to government as the minority shareholder in the plant to ensure its smooth running, seeing its potential in terms of job creation for the youth, providing food and above all making Ghana the hub for quality starch production to feed the sub region.

11.Support from the Ministry has however not been forthcoming as the Ministry ceases every opportunity to denigrate Tiberias and its owners with no consideration for the huge investments the company has made to restore full operations.

12.We have always and will continue to collaborate with the Ministry of Trade and Industry to build a viable company and contribute our quota to the development of a vibrant starch industry in Ghana.