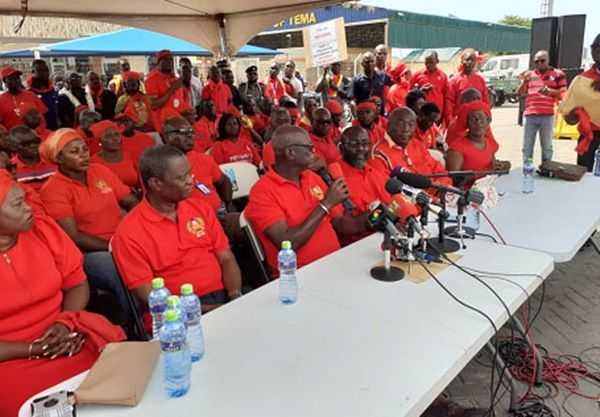 THE MARITIME and Dockworkers’ Union (MDU) of Trade Union Congress (TUC) has expressed worry about the huge revenue losses and the resultant job losses that would hit the country’s maritime industry, if government allows Meridian Port Services (MPS) to carry out the Terminal 3 concession agreement at the Tema Port.

At a press conference, Monday in Tema, the MDU, led by its general secretary, Daniel Owusu Koranteng, called on MPS to grant 20 per cent eligible vessel handling rights to the GPHA in order to keep its workers and avoid any job losses.

According to MDU, the request to have the 20 per cent vessel handling right was part of initial demands made by the GPHA at its negotiations with MPS.

However, the MPS has maintained that if it granted GPHA the right to handle 20 per cent of eligible vessels, it risked losing its investment protection. The MPS has also argued that it got the concession agreement through a legal process which informed their strong position not to grant the request to GPHA.

Mr Owusu Koranteng revealed: “We participated in the negotiation of MPS concession agreement with the expectation of ensuring adequate revenue generation and job retention for GPHA but MPS has turned the negotiation for the review of the Terminal 3 Concession agreement into a forum for the protection of the investment agreement even if that would weaken GPHA’s revenue generation capacity. This would lead to massive job losses for GPHA workers and other companies such as ACS, TCT etc.”

He said the proposal being put across by MPS would not be able to generate revenue for GPHA, neither would it create jobs but rather, would convert GPHA from a landlord to a vulnerable entity that would survive on dole-outs from its tenant – MPS.

He additionally called on government to remedy the damage as soon as practicable following a report by a ministerial committee that investigated the matter.

Alhaji Abdul Rahman Baidoo, National Chairman of the Maritime and Dockworkers Union, for his part, wants the negotiation process to be hastened for peace to prevail within the maritime environment as a result of so much uncertainty which has characterised the industry over the project.