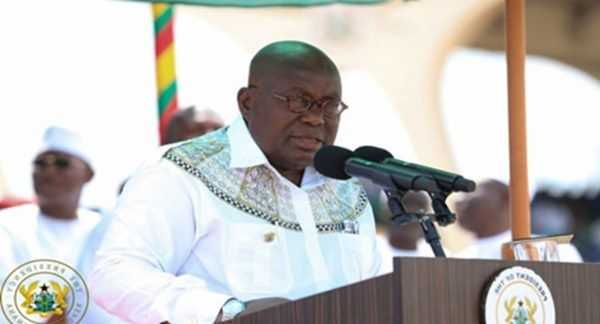 PRESIDENT AKUFO-Addo has expressed worry about the low local participation in the country’s mining industry.

Speaking at the inauguration of the Governing Board of the Minerals Income Investment Fund (MIIF) at the Jubilee House recently in Accra, the president wondered why after a century of mining in Ghana, there was no significant Ghanaian local domestic player in the industry.

Indicating that such a situation was not good enough, he said “the monetization of the mineral royalties will raise enough funds upfront to support the government’s development agenda and also help boost the development of local players in our mining industry.”

The fund is intended to receive minerals, royalties and other related income that are due the republic from the various mining companies and provide for the management of these funds.

It would also create a special purpose vehicle that would be called Asaase Royalties, to raise cash up to half a billion dollars, by selling up to 49 per cent stake Asaase Royalties through and Initial Public Offering (IPO), which is going to be listed on the London Stock Exchange and on the Ghana Stock Exchange.

President Akufo-Addo therefore charged the first governing board of the newly established MIIF to use the financial resources entrusted to them to raise indigenous players in the mining sector which has hitherto been dominated by international corporations.

“Hopefully, this fund, when properly managed and selectively invested, will over the period of time erase that image and give us a new architecture in the mining industry which includes significant Ghanaian players,” he said, insisting “it shouldn’t be the case that Newmont, Anglogold Ashanti and all these others are the only players in the Ghanaian industry.”

Chairman of the MIIF Governing Board and Member of Parliament (MP) for Tarkwa-Nsuaem, George Mireku Duker, speaking on behalf of his colleagues, thanked the President for the confidence reposed in them and pledged to live up to expectation whiles “South Africa for example, has developed because the mining companies there are owned by South Africans, Ghanaians are lacking in this perspective and that is why your vision to ensure that the local content aspect of this field is really moved by this board and we are going to go by that charge,” he assured.

Other members of the Governing Board are the CEO of MIIF, Yaw Baah; Felicia Ashley, representative of the Ministry of Finance; Dr. Maxwell Opoku-Afari, Deputy Governor of the Bank of Ghana; Amishaddai Owusu – Amoah, Commissioner for Domestic Tax Revenue Division of GRA; Naana Dufie Addo, President’s nominee; Kow Essuman, President’s nominee, and Antoinette Kwofie, also a nominee of the President.

A ninth member who is supposed to be a representative of the Ministry of Lands and Natural Resources is yet to be appointed.

According to the Minerals and Income Investment Fund Act, 218, (Act 978), the Act is to establish a fund to manage the equity interests of the Republic of Ghana in mining companies, to receive mineral royalties and other related income due the republic from mining operations, to provide for the management and investment of the assets of the fund and for related matters.

The Act was endorsed by the president on the 3rd of December, 2018, after it was passed into law by Parliament.