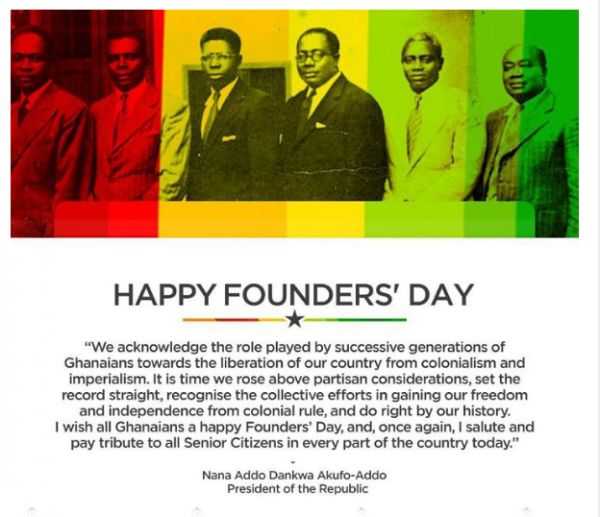 No one is discounting the influential role Kwame Nkrumah played in the battle for Ghana's independence. His contributions to our political liberation were enormous.

Notwithstanding that, the others, including J. B. Danquah, Ako-Adjei and the others also played similar roles on our way to independence.

I, therefore, find these overarching attempts to downplay their roles to be puzzling. Let me not spend much time boring readers with the details as to the roles each member of the Big Six played and harp on something I find intriguing.

The clamor for Nkrumah to be credited solely for our independence gets heightened when the 'Founder's/Founders' Day' debate comes up.

We are being importuned to accept that Dr. Nkrumah singlehandedly founded Ghana by the remnants of the defunct Convention People's Party.

The National Democratic Congress, the party that doesn't appear to know its ideological underpinnings, has jumped onto the bandwagon, calling on us to see Dr. Kwame Nkrumah as the founding father of Ghana.

This line of argument has nothing concrete to undergird it with respect to recent happenings. Let me even, for the sake of argument, grant them their wish, what would be the narrative regarding the peace accord brokered in Dagbon?

The opposition NDC has been very vocal saying that President Akufo-Addo alone cannot take credit for the peaceful resolution of the conflict between the Abudus and the Andanis because it was a process and not an event.

They make the case that successive governments saw to the OtumfuorOsei Tutu-led Committee going to great lengths to have the issue resolved.

This, therefore, according to them, goes to show that previous administrations should also be credited for the laudatory feat chalked in Dagbon.

Impliedly, our struggle for independence was an event and not a process for any other person or persons to be a part of except Nkrumah, but that of Dagbon was a process.

The poverty in their argument lies in the fact that both events went through processes involving various key personalities but they want others to share in the glory apropos the Dagbon peace accord but do not want our independence to be shared by all the key actors.

No single individual should be given credit for our independence. The struggle for independence was a collective one and cannot be given to one person. Founders' Day befits the occasion.

P.K. Sarpong, Whispers from the Corridors of the Thinking Place.