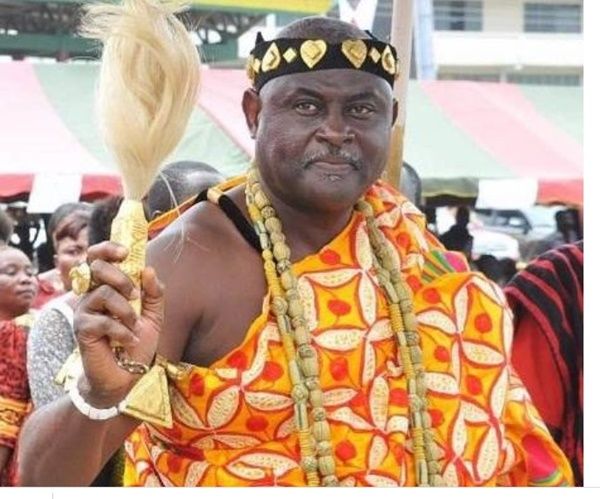 TRESPASSING ON THE PARCEL OF LAND BELONGING TO THE OSU STOOL

The Head of the Osu Traditional Area and the Chairman of the Greater Accra Regional House of Chiefs, Nii Okwei Kinka Dowuona VI wishes to make known to the general public that all that piece of land in extent 0.046 hectare (approximately 1.14 acres) more or less being GLPIN GA48906150010 Block 1 Section 019 situate at West Ridge in the Greater Accra Region of the Republic of Ghana belonging to Osu Stool has been trespassed upon.

As such the following should be noted:

• On 20th June, 2020 an article published by Joy Online claiming that armed men had demolished structure belonging to the Nigerian High Commission is wrong and has no justification.

• It came to the attention of the Osu Stool that the original building on the parcel of land was demolished and, in its place, a new structure was being erected.

• Osu Stool was informed that the structure was being erected by a Nigerian business person with the aid of the Nigerian High Commission and was forcibly trying to take over the said parcel of land.

• The Osu Stool was also informed that the structure is planned entertainment complex to be used as an events center for commercial purposes and is not a block of flatsas has been purported in the reportage.

• The Stool has a high level of respect for foreign missions and has therefore on several occasions verbally informed the unidentified trespasser of the ownership status of the land through the security personnel resident on the parcel of land.

• The Stool has subsequently sent messages inviting the trespasser for a discussion on the ownership of the land.

• There has till date been no response or acknowledgmentin response to the stool’s invitation nor has the trespasser proceeded to submit any documentation of permission upon which it demolished the original structure on the land and proceeded to erect a new structure.

• The trespasser has openly and with impunity disrespected the paramount Chief of the Osu Traditional Area, Stool Lands Authority and the Traditional Council of Elders by its attendant behavior.

• Authorities including officials from the Lands Commission, the Cantonments Police and Police Headquarters have invited the trespassers to produce documentation for the parcel of land.

• The intention of the trespasser is to forcibly take over land under the cover of diplomatic mission from the stool land without redress and without the permission of the traditional authority and its council of elders.

• It is known by the Osu Stool that the trespasser till date does not hold it its possession any documentation on the parcel land.

• The Osu Stool remains the owner of the said parcel of land and wishes to notify the general public that all other intended users of the property must first seek the permission of the stool.

• The stool informs the general public that there has never been a purchase of any parcel of land from it by the foreign office of the Nigerian High Commission.

• The Lands Commission has confirmed that the High Commission did not purchase the parcel of land from them.

• This is the second attempt to forcibly take over land that belongs to Osu Stool by unknown persons acting under the political influence of the Nigerian High Commission.

The Osu Stool therefore wishes to inform the General Public and all concerned that lands that fall within the entire OsuMantse layout is not State Land but is a part of OsuParamount Stool Lands. As such it is only the Stool that has the mandate to grant leases be it expired or otherwise. Forceful acquisition of these lands by trespassers who hidebehind foreign offices and political influence should desist from doing so.

We entreat the media to be extremely cautious in their reportage and not to relay any messages of this sort with no research evidence or support documentation, relating to theconfirmation of ownership of Osu Stool Lands.

The Ministry of Foreign Affairs and Regional Integration says it has sanctioned investigations into an alleged demolition of a property under construction belonging to the Nigeria High Commission in Ghana.

According to the Ministry, investigations "are ongoing to unravel the facts of the matter and bring the perpetrators to book."

A statement issued by the Ministry on Saturday, June 20, 2020, said the "Government of Ghana has beefed up security at the said facility and the situation is under control."