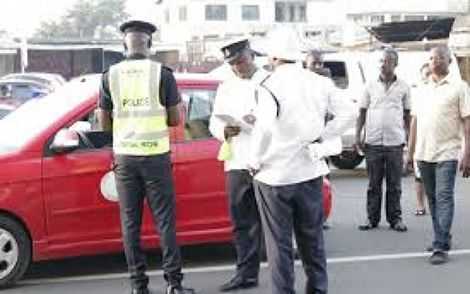 The Head of the Volta Regional Motor Traffic and Transport Department (MTTD) of the Ghana Police Service (GPS), Chief Superintendent Victor Oduro Abrokwah, has cautioned police officers against extortion of money from motorists, reminding them that the practice is unprofessional.

He described the practice as extortion adding that such conduct was a breach of the law and, therefore, punishable.

Mr Abrokwah equally advised erring drivers who were eager to offer money for their freedom to desist from the practice as it was also an offence punishable by law.

“The GPS is doing all it can to change the perception people have about its integrity.

Police officers who collect money from drivers for whatever offence put the integrity of the service into disrepute and that is what we, as police officers, must guard against.

Anyone caught engaged in that illegal act will be dealt with according to the law.

“In the same way, drivers must also do the right thing to avoid police officers going after them.

If they breach the law, they must be ready to face the consequences instead of trying to buy their way out by offering money to our men on duty”, Mr Abrokwah emphasised.

Speaking in an interview with the Daily Graphic during a stakeholder’s engagement on road monitoring report review meeting at Kpong, the MTTD boss said the Police authority was determined to change citizens’ perception about the institution and would, therefore, deal with any officer who dragged the name of the institution into disrepute.

The meeting was attended by stakeholders from Yilo Krobo, Upper Manya Krobo and Akuapem North, all in the Eastern Region.

The rest were from North Tongu and Ho Central in the Volta Region.

The programme was on the theme: “Together against Corruption.’’

It was organised by Socio-serve Ghana, an NGO, with sponsorship from STAR-Ghana.

They discussed updates on a project report, recommendations and the way forward.

Driving with expired road worthy documents and vehicle insurance, over loading and the refusal of drivers to allow the police to conduct checks on their vehicles were some of the issues discussed by the participants.

Mr Abrokwah also described as instructive, the recommendations from the report and said when put to use, it would help do away with the negative impression people had about the police.

He, however, said the police administration needed to strengthen its monitoring and evaluation unit to constantly remind personnel of proper conduct.

The Yilo Krobo and Lower Manya Krobo Director of the Commission on Human Rights and Administrative Justice (CHRAJ), Mr James Awumey, urged Ghanaians not to hesitate to report issues of corruption to anti-graft institutions such as the CHRAJ for investigations.