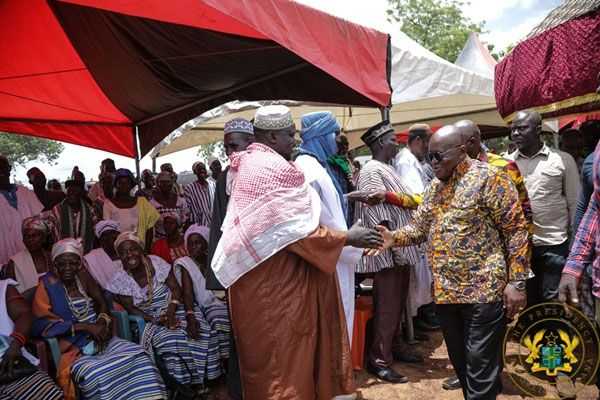 The President of the Republic, Nana Addo Dankwa Akufo-Addo, has assured residents of the Upper East Region that the Bolgatanga to Bawku road will be completed before the 2020 elections.

Addressing a durbar of Chiefs and people at Binaba, in the Zebilla constituency, in the Upper East Region, on Tuesday, 13th August, 2019, President Akufo-Addo assured that his Government, as opposed to the promises made by the erstwhile Mahama-led administration, will ensure the completion of this road.

“The deceptions of the past, like the Minister (of Roads and Highways) has said, will no longer be a part of our future,” he said.

The President recounted how, in 2016, he said he was yet to see the so-called “unprecedented infrastructural projects” touted by his predecessor, John Dramani Mahama.

“He (Mahama) told me that I was asleep at the back of my car when I was going around the country, and that was why I was not seeing the infrastructure. And, yet, ever since I came into office, that is all they keep asking for – ‘our roads, our roads’. If the roads had been done, would they be asking for that?” President Akufo-Addo asked.

He, thus, appealed for the support of the Ghanaian people for the programmes and policies being implemented by his government, adding that “without your support, without unity amongst you, it will be very difficult for us to achieve our targets and our purposes. That is my appeal to you.”

The Minister for Agriculture, Dr. Owusu Afriyie-Akoto, noted that the successes chalked by government’s flagship programme for the revival of Ghanaian agriculture, “Planting for Food and Jobs”, are evident in last year’s bumper harvest of produce, and the fact that the country did not import a single grain of maize in 2018.

“Tomorrow (Wednesday), the President is visiting the Tono Irrigation Scheme, that scheme is a scheme which gives irrigation opportunities to farmers to farm 12 months in a year. The government is spending over 30million Dollars on this Scheme,” he stressed.

Agriculture, he explained further, “can be a profession, and the President, through his policy of Planting for Food and Jobs, which has five different models including livestock, is creating the atmosphere for you, as students, to come into Agriculture because you can make a big living out of farming.”