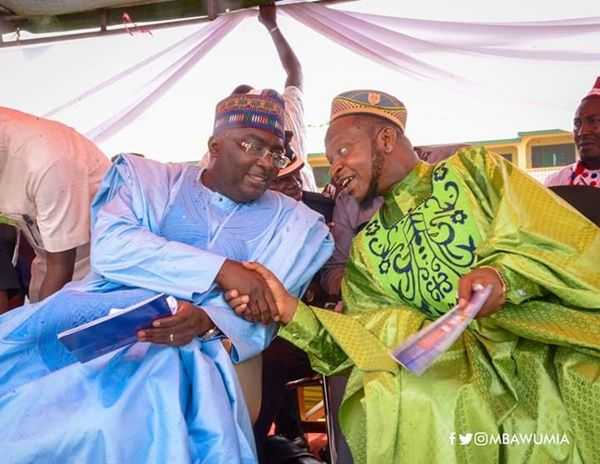 The Ghana Muslim Mission held its 61st annual National Conference under the theme “Contributing Towards Quality Education and Moral Upbringing of Children: A Must for Every Muslim”.

The conference was attended by Muslims from all over the country and was graced by H.E the Vice President of the Republic of Ghana Dr. Alhaji Mahamudu Bawumia as Special Guest of Honour accompanied by the Chairman of the Hajj Board Sheikh I.C Quaye. The leadership of the Opposition party the National Democratic Congress (NDC) led by its flagbearer H.E John Dramani Mahama and the General Secretary, Johnson Asiedu Nketia and Hon. Collins Dauda also graced the occasion. The Omanhene of Kukuom was also present to grace the occasion.

In his speech H.E the Vice President of the Republic of Ghana pledged government’s unflinching support for the College of Education Project initiated by the Ghana Muslim Mission in Kukuom. He indicated that the government is committed to making education accessible to the youth and therefore the introduction of the free Senior High School Policy which has seen an increase in student enrollment over the years.

He added that the College of Education projects initiated by the Ghana Muslim Mission is in the right direction and will help train more Arabic language instructors for Islamic Schools. On his part the VEEP donation an amount of twenty thousand Ghana Cedis( ₵20,000.00) towards the College of Education Project. He commended the Ghana Muslim Mission for their efforts at helping the Muslim Community and helping government in its development drive.

The National Chairman of Ghana Muslim Mission, Sheikh Dr. Amin Bonsu in his welcome address mentioned the resolve of the organization to support the education of Muslims and therefore the need to establish Islamic Colleges of Education in some parts of the country. Most of these projects are at various stages of construction in Kukuom, Beposo, Affram Plains and a University Project at Esereso in Kumasi.

He repeated the Ghana Muslim Mission’s resolve to help governments provision of education by making efforts to establish an educational institution through internally generated funds in order to help alleviate poverty and illiteracy as well as raise the moral standard in Muslim Communities. So far the organization has over 120 schools which include Kindergarten, Basic and Senior High Schools.

The National Chairman also urged government to ensure that the rights of the Muslim child, as enshrined in the 1992 constitution of the Republic of Ghana, are upheld by ensuring that constant humiliation of young Muslim ladies in schools and institutions are halted.