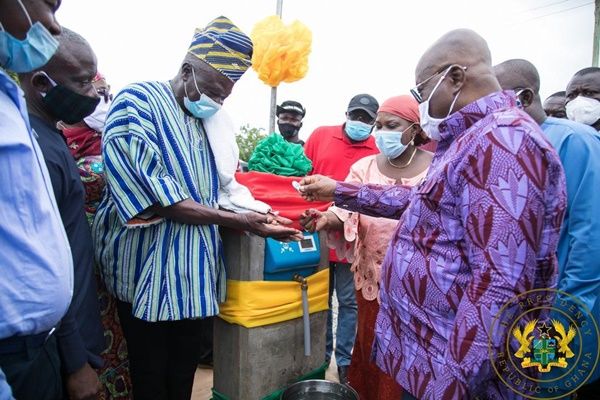 President Akufo-Addo has indicated that the three-day working visit he embarked on to Northern Ghana was also meant to seek prayers and blessings from the Chiefs and their people for the upcoming 2020 general election.

He again mentioned that going to Northern Ghana for the three-day working visit was to announce to the people in the northern sector that the governing New Patriotic Party (NPP) has re-elected him and their son Dr Bawumia to lead the party in the 2020 general election.

A press statement signed and issued by the Deputy Minister of Information, Pius Enam Hadzide said the visit will afford President Akufo-Addo the opportunity to inspect the progress of work on ongoing developmental projects, commission completed projects and cut the sod for work to resume on others.

He seizes the opportunity to engage and interact with chiefs and people of the various communities.

The statement said President Akufo-Addo shall specifically commission the Yapei Water Project in the Savannah region and the Nalerigu Water Project at Nalerigu.

He will cut the sod for the start of construction work on the Yendi, Damongo and Tamale water projects and cut sod for the construction of a regional office building for the Youth Employment Agency (YEA) at Nalerigu.

President Akufo-Addo will pay courtesy calls on and interact with traditional rulers including the Kusuguwura, Yagbonwura, Nayiri and the Yaa Naa and return to Accra on Thursday, July 29, 2020.

But President Akufo-Addo hinted that his visit to Northern Ghana afforded him the opportunity to make known his Presidential race in the 2020 general election official and also to announce that his Running Mate remains the Vice President Dr Mahamudu Bawumia.

“My visit to the Northern Ghana was to tell the chiefs and the people that the NPP has elected me and their son Bawumia to lead the party again in the 2020 general election. I went there to seek their blessings and prayers as a support for the 2020 general elections so that victory will be ours; it was part of the reason why I went to the northern part of the country," President Akufo-Addo hinted on Wontumi TV.