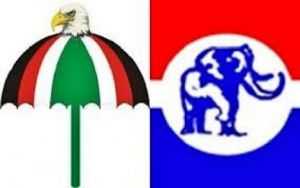 At a news conference at Akyem Akroso, the Regional First Vice Chairman of the NDC, Mr William Atamudzi, alleged that some members of the NPP had been assaulting, threatening and preventing NDC members from registering.

CoronaLife Web Series
But in a sharp rebuttal at a press conference at Akroso the following day, the Eastern Regional Youth Organiser of the NPP, Mr Jerry Osei-Poku, refuted the allegation with the explanation that the NDC had anticipated defeat in the general election, hence the flimsy excuses.

Telefonica
He alleged that the NPP had injured three NDC members who were currently on admission at the Akroso Health Centre, while another NDC supporter, Kwame Tawiah was pepper-sprayed at the Akroso Police Station while lodging a complaint in the presence of policemen who did not arrest the perpetrators.

Mr Atamudzi alleged that some of the police personnel in the constituency were in bed with the NPP that was why their members carried out the violence with impurity and alleged the the MP for the area, Mr George Kwame Aboagye, had fired a warning shots at a polling station.

CBG wishes All Muslims happy Eid ul Adha
Speaking at the NPP news conference, Mr Osei-Poku stressed that the NPP, which had won the parliamentary seat since 1996 with not less than 70 per cent of the total votes cast, would never foment violence in the area or bus people from different constituencies to register in the area.

He stressed that on realisation that defeat was staring at them, the NDC executive members at the regional and constituency levels were making unfounded allegations against the NPP to save their faces concerning their imminent defeat.

He stated that Mr Atamudzi and his cohorts had been lying, perpetuating violence, intimidation and assaulting NPP members but the NPP constituency executives who were peace-loving people would not reciprocate but had been concentrating on the registration in order to retain the parliamentary seat.

Mr Osei-Poku and his constituency Chairman, Mr Frank Anim-Bediako vehemently denied any firing of gunshots at any registration centre by the MP, Mr Aboagye, neither had any NPP member assaulted, harassed or intimidated any NDC member since the registration exercise began as being alleged by the disgruntled NDC executive members.

When the Daily Graphic contacted the Oda Municipal Police Commander, Chief Superintendent Daniel Amoako on the issue, he said the police were not supporting any of the political parties as alleged by the NDC but they were working professionally.