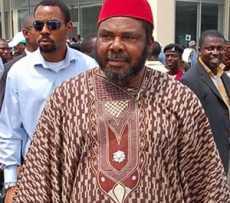 Veteran Nollywood actor, Pete Edochie in a recent submission has condemned the act of men kneeling down and proposing to their lovers.

While many people label such acts as romantic, Pete Edochie doesn’t see the need in it as he has frowned at the way Africans are adopting the doctrines and culture of the whites, thereby neglecting our own tradition and culture.

Pete Edochie condemned African men who kneel down to propose to their wives to be, all in the name of love stating that if a man does that, he is giving the woman power over him thereby making her the head of the marriage.

“Kneeling to propose to a woman is white people’s culture because women dominate there and have more right than men, it is not the African man’s ways,” he said.


To buttress his point, he used our traditional setting as an example and stated that it is a woman who kneels to give drink to a man to show her loyalty, humility and total submission to the man and that’s the way it should be.

“I didn’t kneel to propose to my wife and we’ve stayed 50years in our marriage, I took my time to woo her, when it’s time to settle down, I asked if she’ll marry me and that was it”, he said.

Pete Edochie also narrated how the Whites came to Africa pretending to be archaeologists but little did we know they came to destroy our culture and trade us.