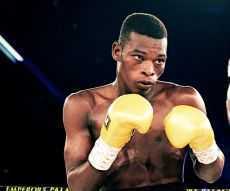 Richard O. Commey former International Boxing Federation (IBF) Lightweight Champion has stated that he will not hesitate to move up in weight if he finds it uncomfortable to fight in his present weight category.

According to Commey, he is currently feeling comfortable fighting in the lightweight division and has no difficulties making the weight, hence no need to move up.

"But I would not hesitate moving up in weight and fight in the welterweight division. At the moment I am very comfortable in the division," he said in an interview with the GNA Sports.

Commey said he was also looking forward to having a rematch with Teofimo Lopez who knocked him out to snatch the IBF title from him.

"I am ever ready to go in for a rematch if he is also ready to offer me the opportunity. I am sure i would be able to make amends when given the chance again," Commey stated.

Commey said, what happened in the last fight that saw him visit the canvas in round two in his second title defence was unfortunate.

"What happened to me could happen to anyone in boxing. When I was knocked down I felt I was good to rise up again and I did but unfortunately I was unable to make it.

"Let me make something clear. I have never been knocked down in my career. So that unfortunate incident was the first time in my career, but i have learned my lessons," he added

Commey has been training at the Bukom Boxing Arena in preparation to relaunch his world title ambitions.